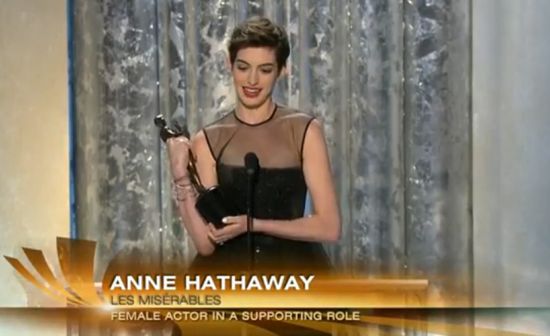 While The Dark Knight Rises might not have received a bunch of nominations at the various awards show, Anne Hathaway made sure the movie was not forgotten at last night’s Screen Actors Guild Awards. Anne Hathaway, who played Selina Kyle/Catwoman in The Dark Knight Rises, won the SAG Award for Outstanding Performance By A Female Actor In A Supporting Role for her performance in Les Miserables.

The Dark Knight Rises was nominated for a SAG Award for Outstanding Action Performance By A Stunt Ensemble In A Motion Picture, but Skyfall wound up winning the SAG Award in that category. Anne Hathaway taking time to acknowledge not only the cast for Les Miserables but also for The Dark Knight Rises showed she is a true class act, and we for one hope she gets a Catwoman spinoff movie.