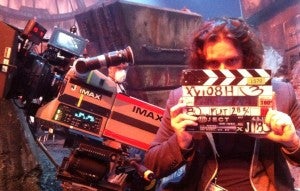 It's official, folks--there was no hint dropped in Iron Man 3 that would lead into an Ant-Man movie.

Why's that significant? Well, a lot of folks assumed that when soon-to-be Ant-Man director Edgar Wright said he had worked on a shot in an upcoming summer blockbuster, he meant Iron Man 3, cementing his place in the Marvel Universe.

Instead, Wright has just tweeted the image at left, revealing that he worked on Star Trek Into Darkness.

"There are 2120 shots in 'Star Trek Into Darkness'. I directed one of them. Looking forward to seeing the other 2119," said the U.K.-based filmmaker behind this summer's The World's End.

He'll have a chance tonight at midnight; Star Trek Into Darkness opens a week earlier in Europe than it does in the U.S.