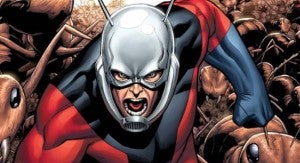 Could the as yet unannounced second Marvel Studios film for 2014 be Ant-Man after all? Marvel Studios President of Production Kevin Feige has strongly hinted that an Ant-Man movie is getting closer, and director Edgar Wright confirmed as much in an interview with Empire Online.

When asked about Ant-Man, Wright said, “I have this thing, though. I think I get kind of superstitious because I don’t feel like I don’t think anybody, reading magazine or reading websites, quite understand how hard it is to make a film and how long it takes, and because the film websites update like hourly, people think ‘What’s the ****ing hold up? Why aren’t you making Ant-Man right now? Make it. Why isn’t it coming out tomorrow?’  But every film that I’ve made has taken like three years. Each one, it’s been three years between movies. I would love for that gap to be shorter, but the truth is just like there’s, it’s almost like a holding pattern. There are planes in the air and you have to figure out which one is going to land before they all crash like Die Hard 2.”

So if Ant-Man does start shooting later this year, the next big question is who will play Ant-Man? A fan favorite for the role is Nathan Fillion. If Nathan Fillion does land the role, then that could be a great set-up for Ant-Man in Avengers 2, since Fillion has a good relationship working with Joss Whedon.

Ant-Man Movie Could Shoot This Year

Funko's Back to the Future: Back in Time Board Game Is Up for Pre-Order