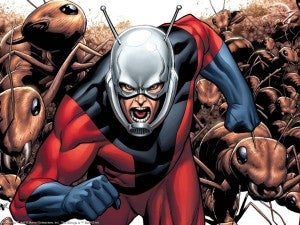 Currently making its rounds on the comics and entertainment Internet, a report at Bleeding Cool suggests that a number of London comics retailers have been approached by individuals looking for "lots of Ant Man comics, in any condition," and that those people may be involved with the production of Edgar Wright's Ant Man film for Marvel Studios.

While the customers in question didn't identify themselves as representatives for Marvel or Wright, the retailers claim that after having been asked directly whether they were involved with the film's production they were taken aback and seemed to confirm it.

Possibly the most interesting part of the report is that the most recent inquiry saw someone approach Gosh! Comics looking for comics that reference "Ant Man's 'echo time locator' from 'the old series'." Whatever that item is, it doesn't show up on a Google search, and fans in the Bleeding Cool comments thread don't know what it is, either. We'll be looking into whether any old Ant Man comics are available on Marvel's Digital Comics Unlimited program, and will check back in if we find anything, but frankly it seems unlikely; if the material was widely available, reps for the production would likely not be stumbling around London making a lot of noise while they looked for it.

Of course, there's always the possibility that they aren't. While Bleeding Cool points out that demand for Ant-Man comics has never been very high and a sudden run on them in the city where Wright would likely begin production seems like a red flag, it could just as likely be someone who is messing with the retailers, knowing that with San Diego coming up and a good deal of speculation that the movie might be announced there. Or it could just be that there's an actual run on the character's comics created by interest in a movie.