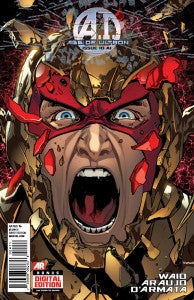 There was a period of time where many fans thought they had this Marvel Studios thing all figured out: Hank Pym, better known as Ant-Man, would be introduced in what was then an untitled Avengers sequel. Then he would appear in his own movie, and create Ultron, who would face off with the super-team in the third of their films.

That narrative made enough sense that some members of the fan press picked up on it as a likely trajectory for a presumed Avengers "trilogy," at the end of which fans would likely lose Robert Downey, Jr. (who is only signed on for two more Avengers films) and Joss Whedon (not even that, but lots of us are expecting he will be eventually).

Then, of course, it came to be known that Avengers 2 would be called Age of Ultron, and that Hank Pym would play no role in the film. That kind of upset a lot of people's thinking.

So...ages ago, back before there was a Marvel Cinematic Universe to speak of and Edgar Wright was working on the first draft of his long-in-development Ant-Man film, clearly Ultron was the antagonist, right? I mean, that's what everyone has figured for a long time!

“I cannot really get into that, but umm… I’ll say no. No he wasn’t,” Wright told Science Fiction when presented with that question at a promotional stop for his new movie, The World's End.

Well, so much for conventional wisdom.

Ant-Man is expected to begin shooting soon in the U.K.