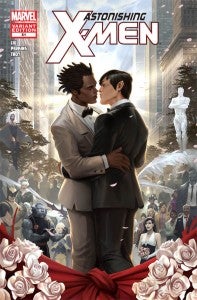 The group urges advertisers to abandon entertainment they deem objectionable, as well as trying to mobilize e-mails to the content providers themselves.

For the most part, their efforts are focused on television, usually zeroing in on specific targets (Desperate Housewives, Glee and The Shield have been historical favorite targets for the group. In the case of Marvel and DC, the organization is urging supporters to e-mail the publishers, using an automated form that e-mails top executives both at the publishers and their parent companies, Time Warner and Disney.

The site previously targeted Archie Comics and Toys R Us earlier in the year when Kevin Keller's gay wedding issue became the first such story told by a major American comics publisher.

That campaign failed to prevent the issue from selling out, and Toys R Us continued to carry the title, which reportedly was sold through before they could consider the group's request to stop carrying the issue. They similarly failed to stop J. C. Penney running ads featuring Ellen DeGeneres.