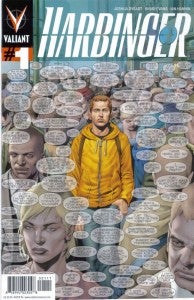 Remember when Barack Obama was first elected President. It seemed like every comic book company around couldn’t wait to slap Obama on the cover. President Obama made appearances on the cover of Savage Dragon, Youngblood, and Amazing Spider-Man. The Spider-Man cover featuring President Obama was so popular that it made it to a fifth printing.  President Obama even got his own limited series called Barack the Barbarian, as well as a number of biography comics.

Well, the Obama cover craze eventually faded, and the President hasn’t been as prominent in comic books as he once was. However, it looks like Obama has once again surfaced on a comic book cover. Harbinger #1 from Valiant Comics arrived in comic book stores today. And while Harbinger #1 doesn’t show an image of President Barack Obama on the cover, he is mentioned on the cover. 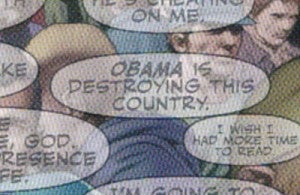 The Harbinger #1 cover features a character who is capable of reading the minds of those around him. Of the numerous thoughts displayed on the cover, one says, “Obama is destroying this country.” It might very well be the first anti-Obama message to ever appear on a comic book cover.

Most of the other messages on the cover are fairly generic stuff like “I’m going to win the lottery, I know it.” However, there is another thought that mentions another very

As far as the comic book itself, Harbinger #1 tells the story of teenager Pete Stanchek, who is a psionic-powered harbinger. He and his friend Joseph Irons are being chased by a mysterious government agency. It’s a pretty interesting read and a good start to this reboot of an old Valiant series.