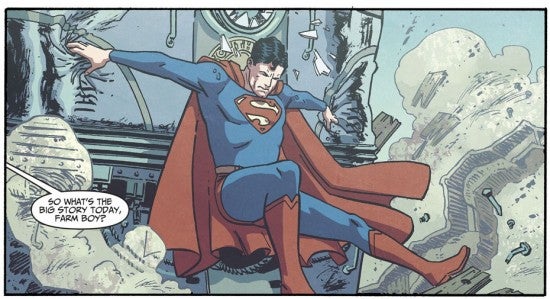 The second chapter (of three) in the Adventures of Superman story by Witchblade writer Ron Marz and Flash Gordon artist Evan "Doc" Shaner hit the (digital) stands today, giving fans their first real insight into the nature and motivations of the metal menace that appeared briefly in the first chapter last week.

The issue, available for less than a buck on comiXology as well as Barnes & Noble, introduces a robot built by Jor-El, Superman's own father. Marz acknowledges the similarities to the classic Warner Bros. animated feature Iron Giant, asking basically what would happen if that character were Superman's brother, and enlisted to become the Silver Surfer?

It makes more sense in context.

Marz and Shaner joined ComicBook.com to talk about the story. 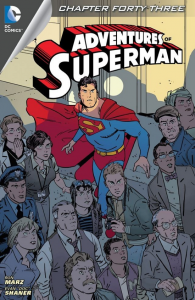 ComicBook.com: For each of the guys: What do you think is the core of Superman, and what are you doing here to bring it out in your work, especially in a fairly limited page count?

Evan "Doc" Shaner: My gut response is there's a certain optimism at the heart of Superman, but I think it might be more that he's always looking forward. He's called the Man of Tomorrow for a reason. For me, many of the best Superman stories about him are helping take the rest of us into a better future. I suppose that's up to a writer more than it would be for me though.

ComicBook.com: Ron, you've written Superman a number of times, but specifically you did write a Superman arc once before. The idea of Adventures of Superman seems to be "if I could write one Superman story..." but how is it different this time than it was for "City of the Future?"

Marz: "City of the Future" was a great experience. Frankly, anytime you get to write Superman, it's a great experience. But "City of the Future" was a story that editorial asked me to tell, the framework was in place when it was offered to me. So it wasn't a case of telling "my" Superman story. This time, I pitched a story that was my version of trying to get to the core of Superman, the iconic nature of the character as well as some of the sadness that's a part of him. I pitched a few concepts, but thankfully editor Alex Antone picked the one that I was most in love with, and that turned out to be "Only Child."

ComicBook.com: Doc, you're somebody we labeled as one of our creators to watch in 2014, and back then we didn't even know that you were doing a Superman book. What's it like to be doing two of the most iconic characters in American fiction (Superman and Flash Gordon) pretty much back to back?

Shaner: Thanks so much, that's very flattering! Tackling Superman and Flash Gordon back to back is certainly intimidating but at the same time incredibly exciting. I've always wanted to draw a Superman story so it was very gratifying to finally get the chance. Flash Gordon was a surprise in that I never thought that opportunity would come along, but much like Superman it's been energizing to work on a character with that kind of history and cultural status.

Shaner: At least for this series, not really. The nice thing about this book is we're largely allowed to form our own take on the characters. Plus, Ron's story fell very well into how I view Superman and his supporting cast, so the transition was really a piece of cake. If it were a different story or we'd been going for a vastly different look at the character then maybe it would have been more difficult, but for the most part we're going for a very iconic look at Superman here.

ComicBook.com: When you're doing an Adventures of Supserman story, do you have different boxes you check off in your head than an in-continuity story? It seems to me that while she's comparably diminished in the New 52, Lois is prominent in almost every Adventures story I've read. 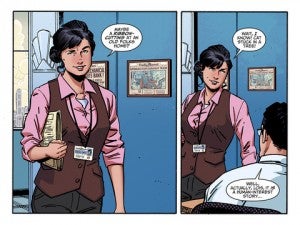 Marz: Look, there was no way I was going to write a Superman story without that moment when Clark pulls open his shirt to reveal the "S" symbol beneath. I wanted to get all those iconic bits in there -- the reveal of the "S" symbol, a heroic entrance for Superman, the citizens of Metropolis responding to Superman.

Certainly, Lois is an iconic aspect as well. Lois is such a great character, an integral part of the mythology. In her own way, Lois is very much an archetypal character. Virtually any Superman story is going to feature Clark Kent and Superman. Lois has a relationship with both of them, though it's a very different relationship with each. She's a bridge to both Clark and Superman.

ComicBook.com: And on Lois for a minute--what's so appealing about giving her the kind of smirking attitude where she calls him farmboy and diminishes his prowess at work?

Marz: Lois is smarter than everybody in the room, and she doesn't care who knows it. In fact, she wants everybody to know it. She's tough, she's talented, she's capable. She likes Clark a lot, but she doesn't see him as her equal as a reporter, so she teases him. Lois is most definitely the alpha of the newsroom.

ComicBook.com: Doc, you said on Twitter that everybody on the cover to the print issue is a character from the comics. Care to give us a run-down?

Shaner: Sure thing. I knew I'd need a decent crowd for the cover so I wanted to take the opportunity to fit as many of the regular folks in the Superman world in there as I could. Included are Dr. Jenet Klyburn, Lois, the Earth-One Jim Corrigan, Cat Grant, Perry, The Newsboy Legion's Gabby, Jimmy, Steve Lombard, Keith White, Professor Pepperwinkle, Ron Troupe, Bibbo, and Myra Allen.

(If it helps streamline things a bit, I've got a numbered guide I put together here)

ComicBook.com:  Ron, you've been a reporter before (how am I doing?), so is there a particular appeal to getting the Daily Planet in here as a setting? Again, I feel like it's something that isn't done as much anymore in the main-line books.

Marz: I worked as a reporter for a daily newspaper for a number of years. So did my wife. I know firsthand how a newsroom works, what those jobs are like, how reporters interact with each other. I honestly think a series set at the Daily Planet, with Superman as merely a supporting character seen once in a while, would be fascinating. There are a lot of interesting stories to be told in that setting.

ComicBook.com: So, Doc, who did you spend more time trying to get just right: Superman or Lois?

Shaner: Lois, definitely. Mostly because I've drawn my take on Superman so many times that at this point I think I could draw him in my sleep.

I'd drawn Lois significantly less, plus I really wanted to make sure I got her right. She's one of my favorite characters in comics though. I already miss drawing her and would love another chance to do so.

ComicBook.com:  Ron, it seems like in the '90s, when you were doing your most regular work for DC, supporting casts played a much bigger role than they do now in the monthlies. Is a story like this a chance to bring a bunch of characters in we might not otherwise see? 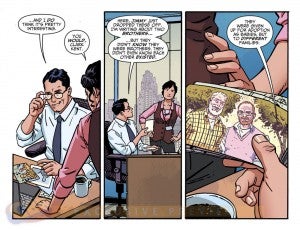 Marz: Well, as you eluded to, I think most everyone comes to Adventures of Superman trying to tell their essential Superman story. That was certainly the case for me, and I think the traditional supporting cast is essential -- Lois, Jimmy, Perry White. I have to give credit to Doc.

He worked in even the lesser-known Daily Planet staffers into the background, and that whole coffee gag with Jimmy is Doc's doing. Great work.

ComicBook.com: Is the spilling coffee a story thing--like, will Jimmy come by later and mention it--or just a fun, inside joke?

Shaner: That's just a one-off gag for my own fun. I really wanted to make sure the Planet seemed like a busy place and I've always liked throwing that kind of stuff in the background for the reader. Plus, it seemed like exactly the kind of thing you can do with Jimmy. I think he's only written into the script a few times throughout, but I wanted to make sure I got to draw as much of him as I could get away with.

ComicBook.com: Is there romantic/sexual tension built into the discussion on the state of journalism that Clark and Lois have? The way she's looking at him, combined with my preconceptions of the characters, leads me to think, "Yeah, it's fluff, but the fact that he's so warm and cuddly about the fluff is part of Clark's appeal."

Shaner: I know that for myself that was one of my favorite parts of the story.

That kind of Clark/Lois banter is a trademark of the Superman books for me so I'm so glad I got to draw it. Ron did a great job at letting each personality shine through the dialogue in that bit too.

Marz: Sure, I think part of the everlasting appeal of Superman is the Lois-Clark-Superman triangle. Honestly, I could write 20 pages of just Clark and Lois bantering at each other, and absolutely love doing it. There's a classic screwball comedy aspect to their relationship, like Gable and Colbert, or Cary Grant and Katharine Hepburn. Clark is the gentle one, the kind one, the nice guy. He's not really seen as a "manly man," which is obviously in stark contrast to his secret. The perfect man -- literally -- is sitting right under the nose of a keen investigative reporter, and she can't see it.

ComicBook.com: What's your elevator pitch for this story? A crashing, giant robot feels very Fleischer-esque, but that's all the details we get in the solicitation--besides an apparently shocking discovery.

Marz: Let's not be coy, a good deal of the inspiration for the story was "The Iron Giant," which is one of my favorite films ever. Superman is an obvious influence on "The Iron Giant" story, so I thought it would be fitting to have that influence work the other way as well. The elevator pitch is "What if the Iron Giant was from Krypton, got turned into the Silver Surfer, and met Superman."

ComicBook.com: Doc, when dealing with Superman, was it nice to get a chance to do "more powerful than a locomotive," a showdown with Lois and then a giant robot encounter all within one story? Or is it pressure to put your stamp on all that iconic imagery?

Shaner: Oh it's both, definitely. Ron gave me a number of those iconic Superman visual moments to pepper in throughout, like the locomotive shot you mentioned. I'm still getting over the fact that I got to draw the "opening the shirt to reveal the S-shield in the supply closet", as well as a few that come up in the second and third chapters. It's intimidating but the opportunity is too exciting.

"Anytime You Get to Write Superman, It's a Great Experience." Marz and Shaner on Their "Adventures"