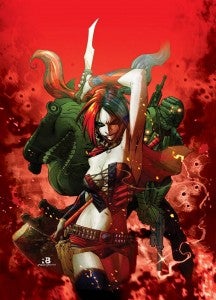 In an article released earlier today about Warner Brothers' move toward exploiting its DC Comics properties in films and television, Variety ran down the usual laundry list of in-development DC movies, most of which are stuck in development hell and not really believed to be moving forward. That list includes The Flash, Lobo, Green Arrow and Shazam--all projects that have been long-in-development. At a minimum, Green Arrow (once titled Supermax) and Shazam have been presumed dead for a while now, and Arrow coming up on the CW seems to suggest that even DC has decided to go another way with that one, even if it isn't officially off the docket.

It also, somewhat surprisingly, lists Suicide Squad and Aquaman as movies currently in development, and omits Green Lantern, a box office disappointment but nevertheless a movie for which the studio had previously committed to a sequel. It seems like Suicide Squad has been something I've heard mentioned before, although I didn't know it was official enough to land on a Warner development wrap-up.

Green Lantern, according to the article, presents a problem for Warner in that the movie's failure at the box office, but the character's popularity and promise, make it difficult to decide whether to give Ryan Reynolds another go with a hopefully stronger script, or whether to reboot completely. If a Justice League movie is in the offing, it frankly wouldn't be surprising to see them go with John Stewart as an option, to make the team a little less lily-white. One of the nice things about Green Lantern is that it's one of the only franchises in mainstream comics where fans will be happy if you pick any of literally five characters (Alan Scott, Kyle Rayner, Hal Jordan, Guy Gardner or John Stewart) to star as your lead.

Batman, the safest and most consistently profitable superhero film property in existence, presents its own problem as Warner is essentially trying to build a DC Universe around what will not only be a new Batman, but one who comes on the heels of the wildly successful Christopher Nolan/Christian Bale iteration. It's distinctly possible that fans will be put off by the next film on principle.

All of these, of course, are in addition to the Justice League and Wonder Woman movies that just got writers this week.

There's also a note in there that when Diane Nelson took over and rebranded DC Comics as DC Entertainment in 2009, they called in everyone's chips and canceled every comic book movie in development that wasn't The Dark Knight-related, and hit the reset button on the whole game. That means that over the last few years, things have been in early development, just beginning to find themselves, but assuming Nelson and company are doing anything right at all suggests that we should start to see some quality DC movies in the next couple of years.

Aquaman and Suicide Squad Movies Listed as In Development at Warner

J.J. Abrams Addresses If He Will Direct DC Comics Movies

How The Conjuring: The Devil Made Me Do It Handles Moving Into the 1980s