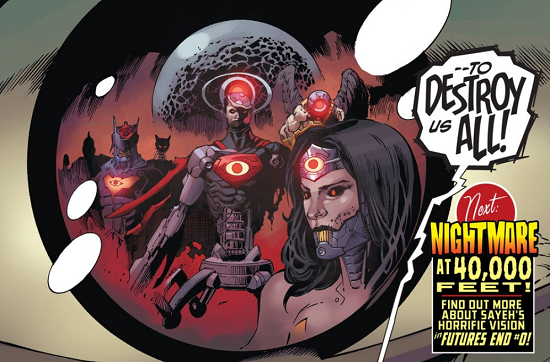 Released today, the first issue of Dan Jurgens and Lan Medina's Aquaman & the Others is a curious animal; the first time (...ever? At least since the Crisis) that Aquaman has headlined two, monthly comics, the spinoff launched not just without superstar writer Geoff Johns (who co-created The Others and is widely credited with bringing Aquaman back to life creatively) but without John Ostrander, whom Johns had previously selected to do a couple of Others-themed fill-in issues of Aquaman.

Johns, of course, had worked closely with Jurgens on revitalizing Booster Gold ten years or so ago, and Jurgens has been a trusted hand at DC since the mid-'80s, but some still wondered why the publisher would pull him away from his responsibilities to DC's upcoming weekly event series The New 52: Futures End to write a comic steeped in Atlantean mythology.

Well, we have at least one part of the answer, now. The panel above is the final one in Aquaman & the Others #1, in which an Iranian woman confined to a psychiatric hospital is kidnapped while babbling about "robots and monsters." Reflected in her eye, as you see, are Brother Eye and the mangled reflections of DC superheroes as seen in Futures End, which Jurgens has a hand in writing and drawing.

The Others haven't yet come up as characters to be spotlighted in Futures End but they are roughly on par in terms of both power level and marketability with many of the title's lead characters.

“There are quite a few characters in the book," Jurgens said in a recent interview about Futures End. "The characters I’m dealing with are completely removed at this point from the Batman Beyond, or the Firestorm, or the Frankenstein story. Eventually, I’m sure they’ll all mesh together. Like Jeff said, there’s got to be at least 20 characters that we’re juggling.”