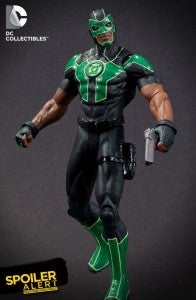 In what has to be one of the quickest turnarounds in the history of DC Entertainment, Simon Baz--the Green Lantern introduced in Green Lantern #0 today--already has a DC Collectibles action figure coming.

Due out in Spring 2013, the figure immortalizes Baz, the tattooed, Muslim and gun-toting Green Lantern whose first appearance today involved inadvertently bombing his former place of employment after a decade of dealing with...well, being accused of being a terrorist because of his Arab heritage post-9/11.

How it came to be that the character was driving around an active time bomb in that stolen van is anyone's guess--we'll have to keep our eyes peeled on the series, and especially on that super-thin new Amanda Waller--for more details.