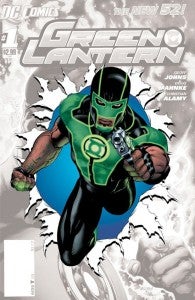 DC Comics recently made headlines by announcing a gay Green Lantern. Now, DC Comics appears to be looking to attract the press again. The cover for Green Lantern #0 was released today, and it reveals a completely new Green Lantern, who is apparently of Middle Eastern descent. While DC Comics has not officially announced the ethnicity of the new Green Lantern, a dark skin-tone and an Arabic tattoo on his forearm has most fans speculating that this will be an Arab Green Lantern.

While the introduction of an Arab character might be welcomed as bringing more diversity, the portrayal of the new Green Lantern on the cover of Green Lantern #0 is generating quite a bit of controversy. If the character is an Arab, many fans are pointing out that permanent tattoos are forbidden in the Islam religion. However, others have also pointed out that the tattoo could be non-permanent, and thus permitted. It’s also possible the new Green Lantern could be an Arab but not Muslim.

A New Bug in The Sims 4 Results in Fire Pee

What Does Doctor Strange 2's New Date Mean for Thor: Love and Thunder?