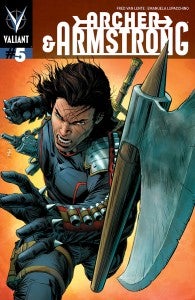 The Eternal Warrior is not a happy person.

In fact, he's downright angry; the Geomancer he was looking to protect is dead, and he blames Archer. This leads to a lot of smashing things with axes, and things aren't helped by the fact that he's not particularly thrilled that his brother (Armstrong) isn't helping him out, but rather helping Archer to get away.

Writer Fred Van Lente joined us to talk about the issue.

Remember that this is a spoiler-filled conversation. Buy the issue here and read along with us.

I like the "you'd think being immortal would help with that, but it don't" thing. It strikes me that superhero comics often feature characters using powers they don't have (Batman sustaining a punch from Superman because even though he's not invulnerable, you can't have him die from it, that kinda thing).

I guess. Immortality isn't the same as invulnerability (well, particularly in Armstrong's case as Mary-Maria was able to put his eyes out) so he can get winded, he still gets hungry, etc. Can he catch a cold? Or cancer? If we get to issue #500 who knows, maybe we'll find out...

I really like Emanuela's style; it's about halfway between Clayton's and somebody like Paul Pelletier, with very clean lines. Was the idea to find an artist who had a voice of their own while still being in the neighborhood of Clayton?

One of our great editors, Jody LeHeup worked with Ema on X-Factor at Marvel. I'm thrilled to have her on board and glad she's providing art for the whole arc. 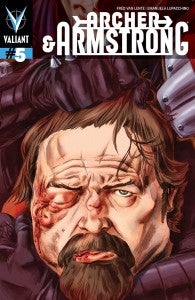 Will we be seeing a lot of the flashbacks during the Eternal Warrior story?

Oh, yes. Every issue, in fact. It was one of my favorite things about the original Eternal Warrior Valiant series.

Just so it's been said, Terry Moore (the same guy who used Lilith) had a main character in his best-known work whose last name was Qin. Maybe I should buy you some of his work, it sounds like you guys are of similar minds.

Qin Shi Huang, First Emperor of China, is a pretty fascinating person, and he really was completely obsessed with immortality: https://en.wikipedia.org/wiki/Qin_Shi_Huang#Elixir_of_life

I got a chance to see the famous Terracotta Warriors that guard his tomb (okay, well used to) at an exhibit in New York -- that's who the warriors in the China flashback are dressed like.

We also used for inspiration a terrific movie Jet Li made about this period, Hero. If you're into historical martial arts action you should check it out.

What was it that made Archer shut down? Just the trash-talking his familiy?

No, he's still in shock from grief carrying over from last issue -- that's why Armstrong says "You've lost more than anyone's ever had."

There's something really awesome about writing a book where you get to just have the guy catch fire for a while and walk (fly) around like that, isn't there?

You hear me complaining? (grin) 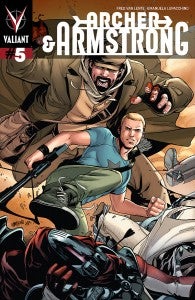 Just a shot in the dark, but considering that Gilad killed an "illusionist"...any chance we'll see that character pop up again, either in flashback or even in the current day? Maybe he just THINKS he killed him.

Xu Fu, you mean? Yeah, there seems to be something more than meets the eye there... "Nothing Is Forever"... seems significant, huh?

But what do I know, some people say he founded Japan: https://en.wikipedia.org/wiki/Xu_Fu

Kinda mysterious he disappeared in 210 BC looking for this elixir of life, though, huh...?

Will "Gilad lives for this" continue to be a catchphrase throughout the Eternal Warrior story?

That said, is it hard writing a character like Gilad, who kind of operates on his own logic and doesn't necessarily conform to what we'd consider normal reason? I mean, the whole "His parents did it, so he must die" thing reminds me of how Bane got started in the Chuck Dixon one-shot.

There's a bit more to it than that -- Archer was a member of the Sect, after all, so Gilad is just covering all his bases. By, you know, killing them.

But it is true the Eternal Warrior serves forces somewhat beyond our normal understanding. A lot more on that next issue.

is it just me or is Geomancer (in the teaser image) a bit less of the typical superheroine body type with the gigantic boobs? She looks believably like a tiny, skinny woman.

Well, Armstrong and Gilad are both huge, so I'd say she's more normal height...

Wait until she stuffs toilet paper in her bra next issue!

No, this is pretty much how she looks. The big-boobs thing in mainstream comics I think gets more play than it deserves ... I'm more concerned with the outfits. I just want stuff people would actually wear. Very pleased with this outfit Ema came up with. It's good to have a woman design super-women's outfits, you know? And an Italian woman, no less! That's a fashion twofer.

Come to think of it, that's more favorite thing about Valiant, old and new: The clothes aren't necessarily all good, but they are at least all competent.