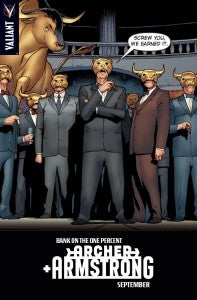 A new teaser for Archer & Armstrong #2, out in September from Valiant Entertainment, depicts a group of villains wearing suits and golden bull's and bear's heads. "Screw you. We earned it," says the villain at the head of the pack, who stand before the iconic bronze "charging bull" statue on Wall Street in Manhattan's financial district. What are these villains called? According to the image's caption, it appears to be The One Percent. Called "a secretive and sinister cabal of money managers and financiers willing to sacrifice more than jobs for profit — human lives, too — to steer the fate of the world for their own gain," the villains are already beginning to draw mainstream media coverage in an AP story picked up by The Washington Post earlier today. "American comics have a long tradition of ripping social issues from the headlines so the heroes can punch them in the face," series writer Fred Van Lente told the AP. "Superman went after lynch mobs and war profiteers in his first adventure in 1938, so 'Archer & Armstrong' is much in the same vein." He added, though, that while this might seem like a nakedly partisan move, more than anything else it's making fun of the social context in which the black and white morality of superhero comics is applied to real-world scenarios. "What we're really trying to do is make fun of the hyper-polarized world we live in, which is reflected in our leads, one of whom is this cloistered martial artist and the other a hedonistic strongman." The issue in question will be on the stands September 5.