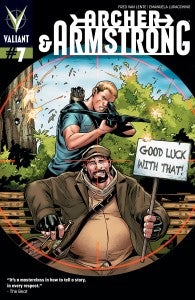 When we last saw Archer and Armstrong, they had just been introduced to the new Geomancer--a re-envisioning of the classic Valiant character who had survived an encounter with the Null and the One Percent, a couple of groups of nasty-baddies that our two heroes (and Armstrong's brother The Eternal Warrior) have some experience with. In this week's Archer & Armstrong #7, we got to see how the new Geomancer interacts not just with her powers, or even with Archer, Armstrong and Eternal Warrior, but also with the world around her--a cool visual tic that makes everything appear as essentially source code. What does it all mean? What role does the Geomancer have to play? And how does all of this tie in with the forthcoming Harbinger Wars? Read on for a few words with series writer Fred Van Lente. As always, these interviews are spoiler-filled. If you haven't seen the comic yet, you really should buy it and read along with us. You slipped the reference to your alma mater in there--even if it wasn't the same Syracuse...well played. It doesn't stick out as much as when Sorkin does it. Sorkin went to Syracuse University too? I actually didn't know that. But then, not a huge fan. "You can't handle the truth"? Great line. I'm kind of lukewarm on the rest of it. I got started on my comics career at SU, as I met Ryan (Action Philosophers) Dunlavey there, as well as Steve Ellis, who I did The Silencers with, the comic that got me my first job at Marvel (in a roundabout way). You do realize that most of your audience will find it difficult to believe the Eternal Warrior had anything to do with Archimedes because he was not included as a variant in any of the Mythbusters experiments, right? You realize ... other people are reading this, right? This isn't just a conversation between you and me? We should probably be explaining opaque references, not making more of them... Anyway, yes, the Mythbusters had a terrific episode in which they actually tried to build the Archimedes "death ray" and learned it ... well, it probably wouldn't be as spectacular as Emanuela depicts it here. But maybe Archimedes knew something they didn't: https://dsc.discovery.com/tv-shows/mythbusters/videos/death-ray-minimyth.htm Fun fact: During the American Revolution, the London press claimed Benjamin Franklin was trying to build the Archimedes device to attack the English fleet. 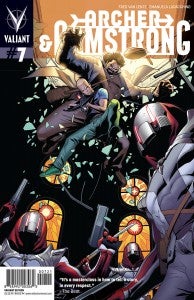 I'm assuming we should read the "Roman, please" as "B*tch, please"? If I need to tell you, you're doing it wrong. This thing with the Null feels like the whole idea of Darkseid's Anti-Life or Thanos's death obsession, no? Death-worshippers, for lack of a better expression? Nihilistic fanatics have plagued us throughout history, both in fiction and in real life. Both the Manicheans and the Gnostics believed matter is inherently sinful, as well. Archer is acclimating nicely. I can't imagine him thinking anyone killing a fistful of people, even the badguys, was "cool" not that long ago! Really? He's been pretty lethal throughout the series -- particularly in #2. I think he thought the whole car stunt was pretty col. Kay is figuring it out quickly, too. Will we see some growing pains as she learns to use her powers or did you feel that was a bit redundant after we just went through the process of watching Archer grow into who he's supposed to be? Nope, she's still learning too. The growing pains will continue -- and may place their whole situation in jeopardy. Aw, c'mon! Who's going to answer such an imporant question with "42"? The Magratheans, for one. ...and is this to imply that Aram thinks Nutter Butters kill rich people? Uhhh ... what? Obviously you've done quite a bit of research in the past for things like Comic Book Comics - is it nice to have a page rate on a gig that allows you to indulge a little of that? Research is its own reward. I'd do it (and still do it) when no one is paying me a dime! They can't force-feed him something easier than an apple? That seems like a really inconvenient way to deliver anything! Of course, that's why no one would suspect it as a murder. "Rising Spirit," eh? Is that to suggest Archer & Armstrong readers should be aware of the upcoming Harbinger Wars? Huh? If I didn't want you to be aware of it, why would I put it in the comic? Is it safe to assume we'll find the Immortal Enemy to be familiar? He's the one closest to you, and always has been.