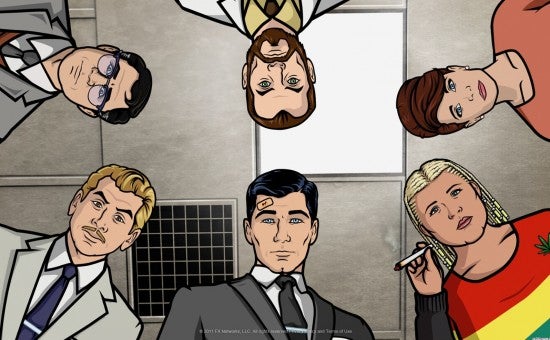 Netflix is headed back to the Danger Zone.

The fourth season of the animated, FX spy-comedy is finally coming to the popular video streaming service--just about halfway through the next season, like they did last year.

Kristen Schaal, Timothy Olyphant, Jon Hamm and Anthony Bourdain guest star in the season, which kicks off with an amnesiac Archer believing himself to be a frycook at Bob's Burgers (a wink and a nod to the other animated series on which Archer star H. Jon Benjamin stars, which airs during Fox's Animation Domination block on Sundays).

This release comes hot on the heels of the announcement, that FX is ordering two more seasons of the show.

Archer seems to only getting more and more popular as time goes on the Season four opener was their most watched episode ever in all the key demographics, and then the show continued to break that record three or four more times over the next two years.

The season four episode “Coyote Lovely” was sneak peeked at 2012's San Diego Comic Con International – ComicBook.com was there. Check out the notes from the SDCC Archer panel, wherein Aisha Tyler warns that she’d “Bring a knife” and H. Jon Benjamin say’s “I happen to be Jewish..”

Also some great photos of the Archer cast being funny.

Check it out at the link. Or don't. But if you just leave that link sitting around, well...