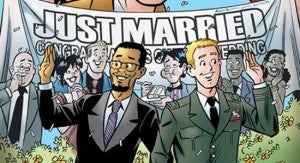 Dan Parent, writer/artist of a number of Archie Comics stories, told the activist website Back2Stonewall last weekend at Wizard World Chicago Comic Con that his characters will be foregoing a planned trip to Russia in the wake of new laws restricting free speech and gay rights. "Russia should be boycotted, so much so that actually in an upcoming special four issue story arch I'm writing the Archie gang are going to take a world tour to four countries. Russia was to be one of them. But they're not going there now," Parent said. "They just can't and they won't. They love and support Kevin." That's Kevin Keller, Archie's first (but not only) gay character, and the idea of the Archies avoiding Russia may be a bit of art imitating life; the restrictive new laws introduced in Russia consider speech in favor of rights for homosexuals and other groups whose sexual practices are seen as being outside of the Russian mainstream "propaganda," which can carry fines and jail time. It would not be surprising if some Archie comics, particularly those starring Kevin, are not allowed to be distributed in the country as a result. The law, passed just ahead of the next Winter Olympics (planned to be held in Russia), is being widely criticized by Western countries, some of whom have expressed concern about athletes' safety. The law is also prompting boycotts of Russian products, services and tourism by some lesbian, gay, bisexual and transgender rights organizations. Following remarks by the International Olympic Committee that athletes speaking out against the controversial law will be penalized, some activist groups are preparing a boycott of Olympic sponsors as well.