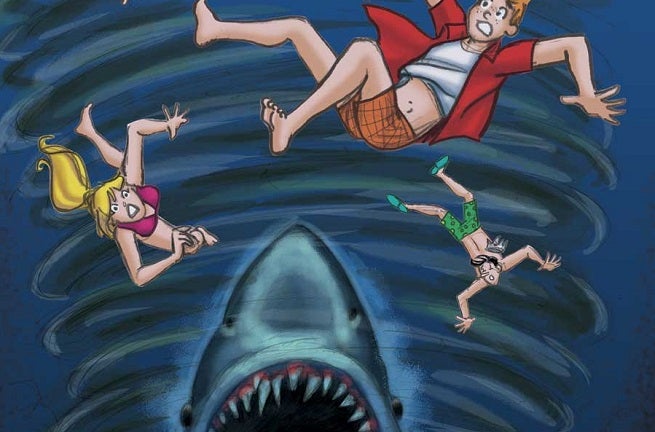 Was Archie's meeting with the Predator this week not enough for you this week? Well, Riverdale's favorite son will be headed back into the world of the surreal in July with Archie vs. Sharknado.

Just in time for Syfy's Sharknado 3: Oh Hell No!, the fabled storm heads to Riverdale USA. Just when Archie and the gang think they can kick back and enjoy a few months of beaches, naps and sun, they're faced with a storm of sharknados.   Archie and his friends have to battle the incoming pop culture storm as it creeps up the "Feast" coast to Riverdale - and then try to save what's left of their hometown.

Written by Sharknado trilogy director Anthony C. Ferrante with art by Archie legend Dan Parent, the "shark-tacular" extra-sized 48-page issue serves as a nice appetizer to Sharknado 3, which debuts on Syfy the same day the book is released in comic shops and digitally: Wednesday, July 22.

"Having a chance to crossover the Archie comics with our Sharknado universe has been a dream come true," Ferrante said. "Riverdale will never be the same and I know fans are going to get a thrill out of seeing Archie, Betty, Veronica and the rest of the gang unleash their inner Fin Shepards."

"I can't tell you the thrill of working on Sharknado. I might be the biggest Sharknado fan, watching multiple airings of the movies, going to theatrical screenings. attending the Riff Trax versions and then buying the DVDs," Parent said. "So to be able to bring Sharknado into the world of Archie is a dream come true. And to be working on it with Sharknado director Anthony C. Ferrante is the icing on the cake! I promise to put my all into this project to make all the Sharknado - and Archie - fans proud!!!"

"Sharknado has become a worldwide merchandise and cultural phenomenon that has thrilled young and old alike," said David Garber, who negotiated this deal on behalf of The Asylum with Archie Comics. "Archie's comics and his adventures have always been fun and exciting. The fusion of these two properties is part of the social media and fan explosion that continues to grow. We are pleased to combine these historic IP's in one consumer experience."

"The Sharknado franchise has soared in popularity due partly to the variety of great celebrities, who bravely encounter this unnatural menace," said Jeff Li, Vice President, Syfy Ventures. "Sharknado survivors come in all forms. It's only natural that Archie and the gang will get a chance to save their town from flying sharks."

Additional cameo roles include Mark Cuban as the President of the United States; Ann Coulter as the Vice President; Michele Bachmann as herself; Jerry Springer as Mr. White, a manic tourist; Washington Redskins tackle Tom Compton as a reporter; *NSYNC singer Chris Kirkpatrick as a pool lifeguard, and Chris Jericho, who will portray Bruce the roller coaster ride operator.

A production of The Asylum, Sharknado 3 is directed by Anthony C. Ferrante from an original screenplay by Thunder Levin.

You can check out the official solicitation text for the comic below. 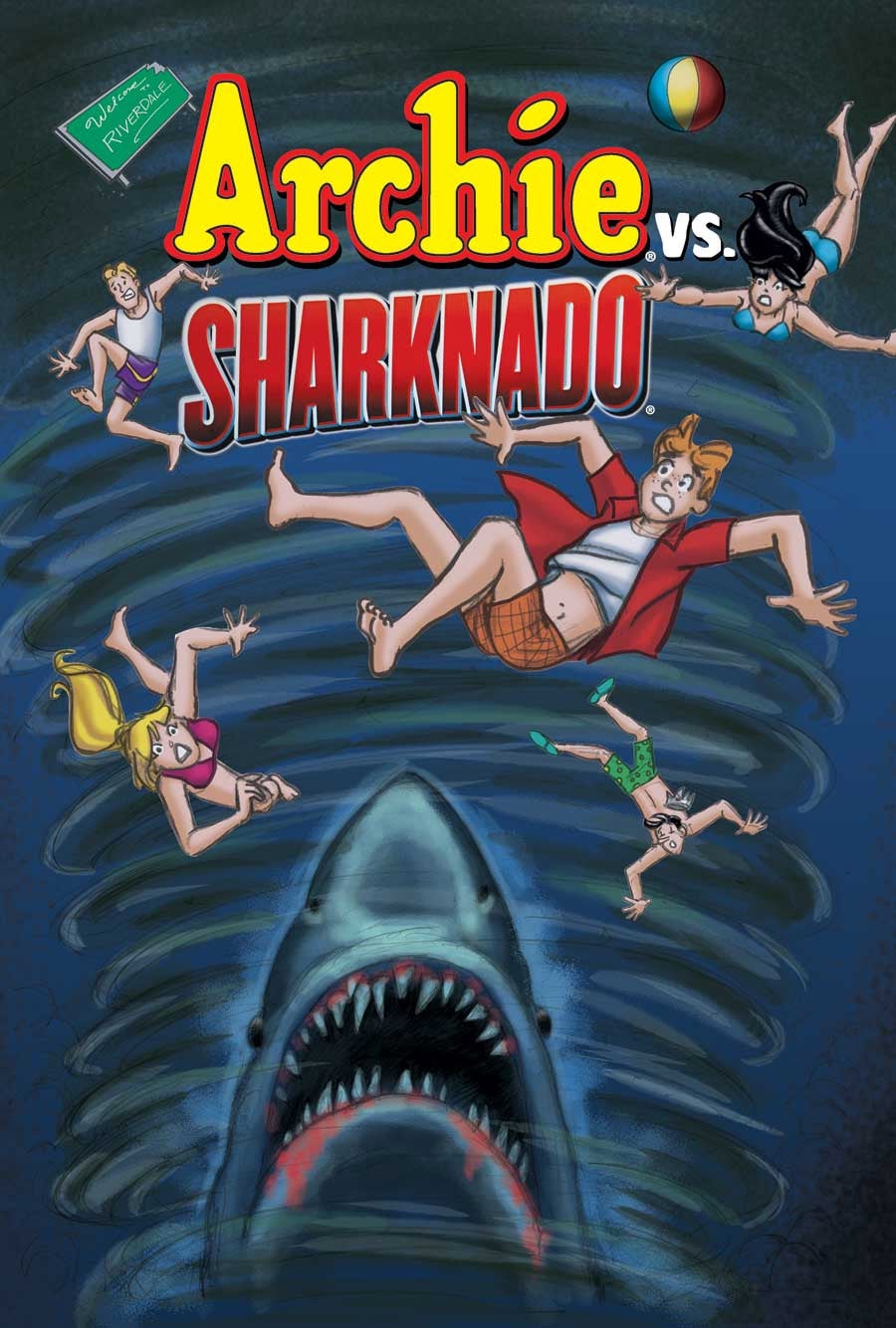 ARCHIE VS. SHARKNADO #1 (ONE SHOT)

It's that time of year in Riverdale! The end of the school year. Time for beaches, barbecues, fun in the sun and... SHARKNADOS!?! That's right, get ready as Archie and the gang brave the storm of a tornado full a sharks that riffs off the pop culture phenomenon known as Sharknado! The story unfolds as sharknados are spotted on the "Feast" Coast! Our heroines have to figure out how to get back to Riverdale, where the storm is about to hit next. Soon Archie and the gang go, go, go as they battle the Sharknado-ravaged Riverdale! Who will live? Who will die? Will this take a BITE out of the end-of-the-year prom? Uh....probably! The comic book action is also concurrent with the plot of SHARKNADO 3 and hits stands right before the film's premiere in July on Syfy. Written by the SHARKNADO trilogy director Anthony C. Ferrante with Dan Parent.

Archie Vs. Sharknado Coming This Summer