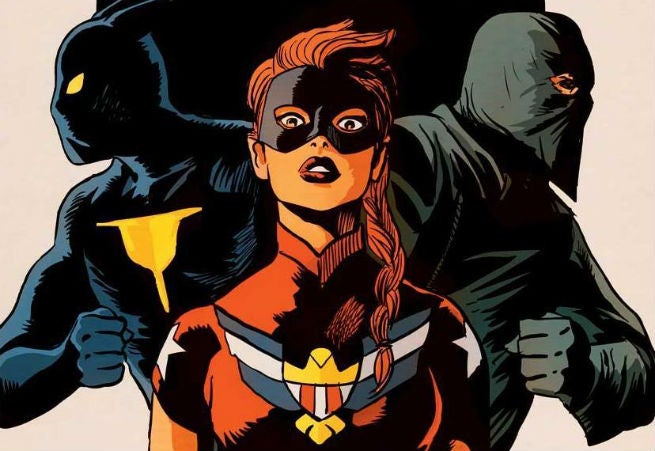 Archie Comics has been on fire of late, launching both a horror line and a superhero line which, despite a conception of the company as primarily a young-readers publisher, have turned out to be hot sellers and garnered critical acclaim, with the first two issues of The Black Hood and the premiere issue of The Fox selling out and going back to print.

That superhero line, the Dark Circle imprint, is headed up by Alex Segura, Archie's Senior Vice President of Publicity and Marketing and a veteran of a similar role at DC Comics.

Segura joined us to talk about the success he's had so far with Dark Circle and what's on the horizon coming up. 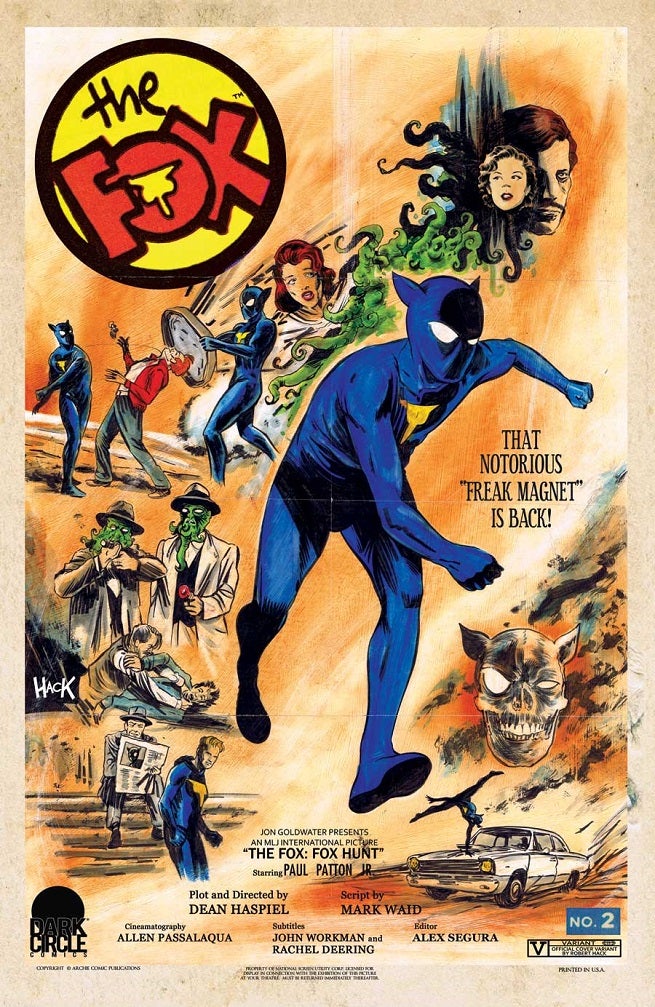 As somebody who's been so involved with the philosophy of the launch, how gratifying has it been for the Dark Circle imprint to be such a success, especially when you consider that these characters have had a hard time getting a foothold in recent years?

It's still very early in the launch, but to see our first three books – THE BLACK HOOD #1 and #2 plus THE FOX #1 sell out at Diamond is a huge vote of confidence from the fans and retailers. It shows that there is an audience for this kind of storytelling – series based, genre-centric, not continuity-heavy and much more cinematic and literary in approach. It's more impressive because THE BLACK HOOD and THE FOX are so different tonally. THE BLACK HOOD is a dark, gritty noir and THE FOX is really all over the place and kinetic in the best ways possible. I'm ecstatic over the sellouts and I know the creative teams are very happy to be part of it. It shows in their work.

Do you think that, even though other publishers tend to struggle to compete with the Big Two, there's a lot of potential left to tap in Archie moving into the superhero sphere this way?

I think so. Archie has a very big library of characters – so we have a lot to play with. We have a ton of genres to explore and eventually, as we launch more series, they'll inch closer and we might see some of them interact. I think the sky's the limit with Dark Circle, and it's really about having a plan, sticking to it and having faith in the talent and letting them tell the stories we brought them in to tell. 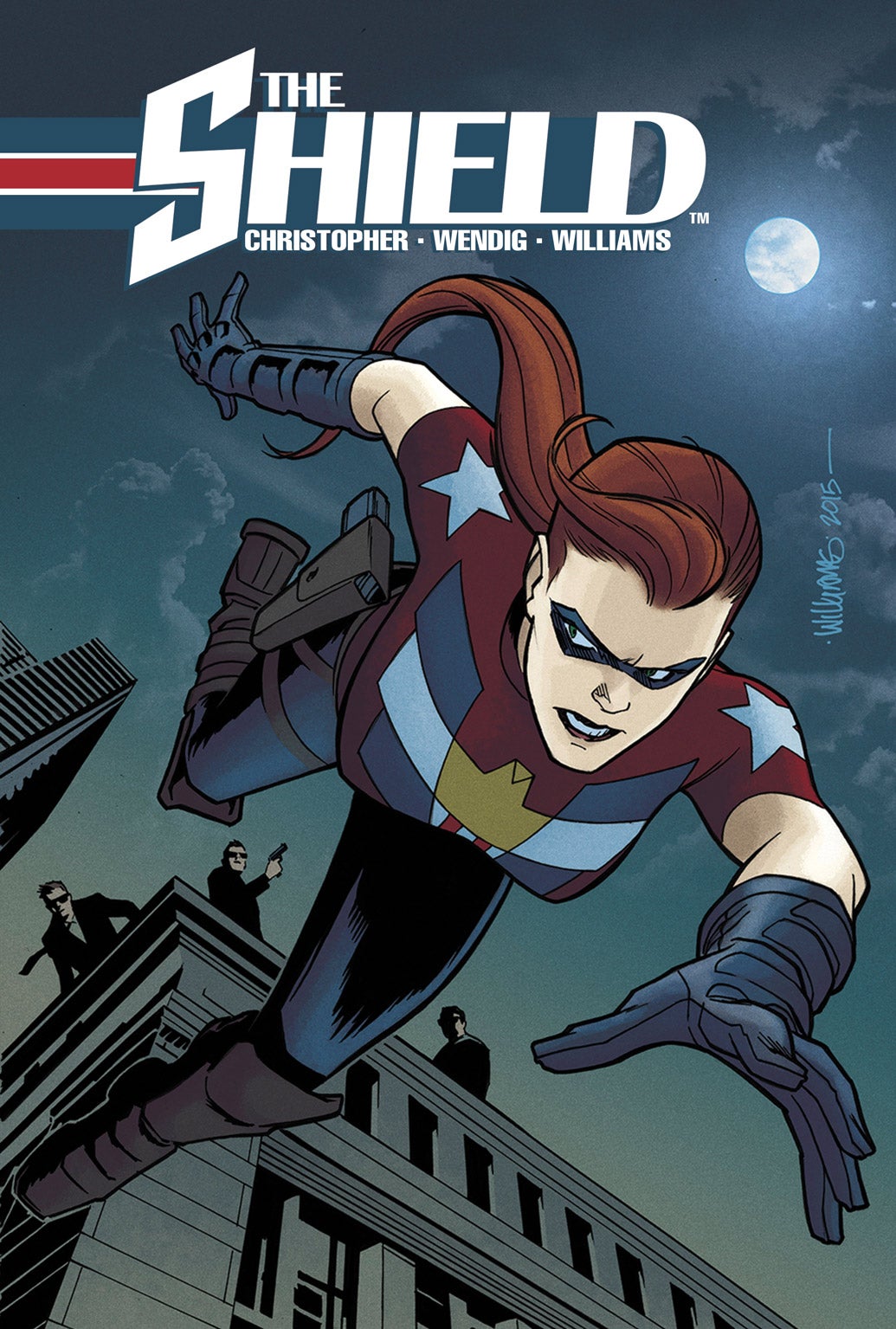 I think it's fair to say that The Shield is one of the better known characters in this line, and has been changed rather dramatically. Whose idea was that reinvention?

It came out of conversations with Jon and Roberto – we really wanted to get the character out of Captain America's shadow. Technically, The Shield appeared first, but that's the argument of the person that came in second. Cap is by far the most recognizable patriotic superhero. Case closed. We needed to pivot and find a new direction. It's amazing how, visually and eventually when the book comes out, quickly people will be able to connect to the Shield. You'll feel as if she was always around. It's really incredible to see what Adam Christopher and Chuck Wendig have cooked up.

Do you think it helps that when you create a "legacy hero" version of a character like The Shield, the relatively small readership of the previous volume also means that there are fewer people not open to change?

I think we're trying to balance that a bit. We want the previous readers, large or small audience, to come along for the ride – and eventually, we'll see nods and hat tips to the past. But this is very much about establishing a new status quo that blazes a new trail and in a very different way. We don't want to just create a new chapter in the story of The Shield. This is the beginning of The Shield's story.

Kind of on the other side of that, I feel like The Hangman is one of the lesser-known properties in the line. What makes you excited for that launch, and what do you think will connect with fans and make them come back?

I see these books as shows on our network – so I see Hangman as our "horror" series. But it's not horror in the vein you'd expect. It's much more grounded, street-level horror. But it's not the same kind of gritty, noir you'd read in The Black Hood. I think Frank is really cutting loose on this one and pairing him with Felix Ruiz, a real up-and-coming talent, will surprise people. It's very much Stephen King meets Quentin Tarantino. 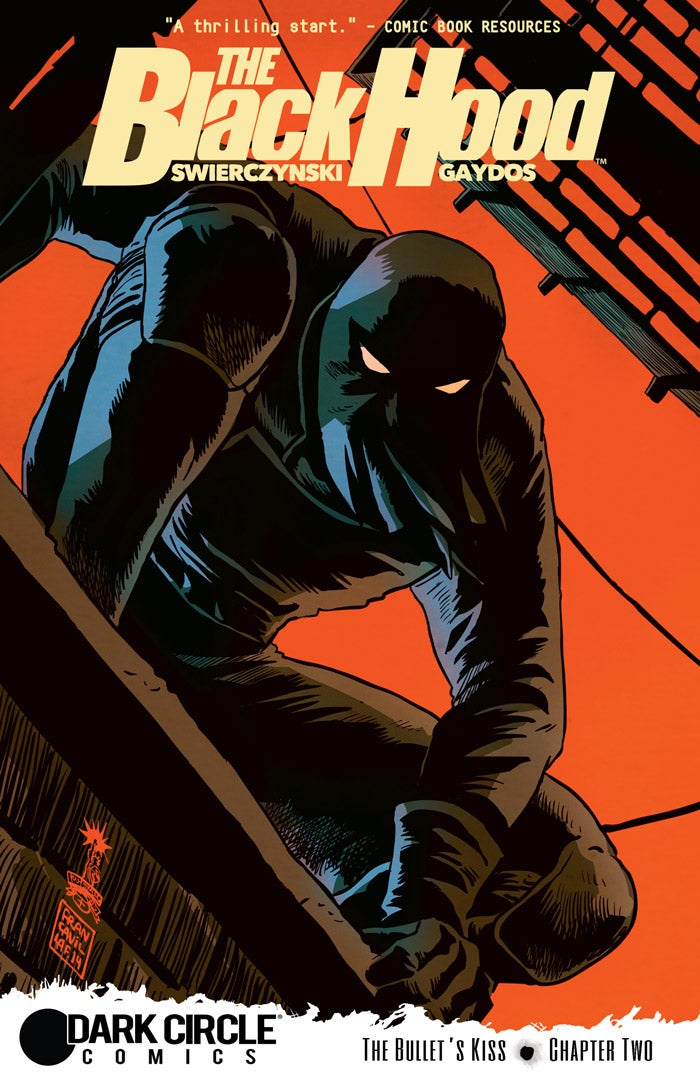 Especially with some pretty high-profile creators, how do you strike the balance of creating a coherent vision for the line and giving it a strong editorial guiding hand, without infringing on their real estate, so to speak?

You try your best to be communicative and lay out what you're looking for on the front end, so when you get work it's in the ballpark and in the voice of the creator. We brought these people in because we like their work, so if we micromanage too much – then something's getting lost in translation. On the flipside, these are company-owned characters and we have to exert some level of "OK, we're cool with this" – but I think the trick is to find creators who you get along with that you think will do good work, and letting them do so.

Obviously you've worked in publicity a lot over the years. Has that helped you in crafting a brand and connecting with the audience here?

Definitely. I feel like you get more traction when something feels like an initiative. NEW CRUSADERS, for better or worse, didn't work because it was just kind of out there on its own. I don't think readers felt like it was a big push – it stood alone. To a lesser degree, the first FOX series suffered from that. While each book in Dark Circle is different, I think people like the idea that we're putting out a spread and they can grab whatever looks interesting. But putting out one title and hoping it works doesn't seem like a viable plan in this market.

I think people will see, not just in our periodicals but in digital and collections, that we're very carefully curating our content and frequency. We'll see BLACK HOOD return with #6 later this year for a one-shot and second story arc, then THE HANGMAN will launch and we'll have THE SHIELD finishing up. After that we'll have a few surprises.

On the digital side, we'll be putting out the NEW CRUSADERS: DARK TOMORROW one-shot in June, followed by another special, NEW CRUSADERS: THE LOST CRUSADE, collecting a lot of different takes on the characters by some familiar names. After that, we'll put out a SAM HILL mini-series from Tom DeFalco and Greg Scott digitally as well. We want to really show an expansion of the line, both in print and digital, and let fans experience all the great content we have, which also includes backlist stuff like Impact, Red Circle and more. I think by offering fans more and showing that you care about how it's packaged, you're more likely to have people stick around and try the next new launch.

Archie has always struck me as a company who owes a lot of their success to venues outside of the direct market. Is it an adjustment working on the superhero and horror lines, where the direct market really is the most obvious audience to go after?

I don't think so – most of my experience is working in direct market comics that feature superheroes, so this is a natural, albeit different role. I think the challenge is finding a way to get eyes on your content when there are so many superhero books out there. The solution? Make them as unique as possible, don't force-feed readers books they don't necessarily want, tell a great story and have excellent art. It's easy to list it in an interview, much more challenging to do in practice.

...And now for some reason that question has made me realize how much I want a Black Hood/Afterlife With Archie crossover. When are we going to see more of that character?

THE BLACK HOOD #6 hits later this year, after a few months off. That'll be a special one-shot, and then Duane and Michael Gaydos kick off their second arc, which is a doozy.

Are hiatuses built into these titles to give the creative team room to breathe and a very clear "fresh start" when they come back, or is that just kind of how it worked out with Black Hood?

It's a line-wide thing. We want retailers to be able to sell-through on the single issues before we solicit a trade. That way, a reader can walk into a comic shop, pick up THE BLACK HOOD v1 and THE BLACK HOOD #6 at once and be instantly caught up, as opposed to trying to figure out what to buy and what's the better deal. We're also trying to keep those first trades as affordable as possible, too.

I vaguely remember you telling somebody that a kind of universe-wide crossover for these characters was something you'd like to do, but not right away. Is there a model you're kind of looking at and saying "They got this part right, they got that part wrong," in terms of all the various reboots at DC, Marvel and Valiant lately?

Honestly, I don't think a universe-wide crossover is in the cards. I think, maybe down the line, you'll see one-offs where two characters interact. You'll definitely see winks and nods to other titles in the existing books – we were just discussing one in THE SHIELD last week – but in terms of having them team up, that might not work. The books are too different. But, again, never say never! I think it all comes down to a good story – and if the creators have one and it works, we're all for it.