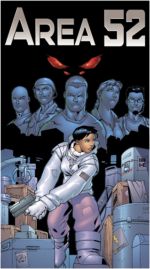 Add Area 52 to the growing list of comic books available in the iTunes app store for the iPhone and iPod Touch. Area 52 is created and written by Avalon Studios founder Brian Haberlin. Clayton Henry is the artist on the series, and Ian Hannin is the colorist. Area 52 is a combination of Sci-Fi, Comedy and Adventure. The series is sort of like the warehouse in the end of Raiders of The Lost Ark. It is a place where other-worldly discoveries are stashed by the government. Everything from Excalibur to Alien space ships can be found in Area 52. Area 52 is a super-high-tech computer automated climate-controlled warehouse, which is hidden in a remote area of the even more remote continent of Antarctica. Area 52 is a mini-series consisting of four issues. Area 52 issue #1 is available as a free download, while issues #2 through #4 are priced at 99 cents each. Area 52 is being released by Tasty Pop, and it is the first of several Avalon Studios titles which Tasty Pop plans to release.