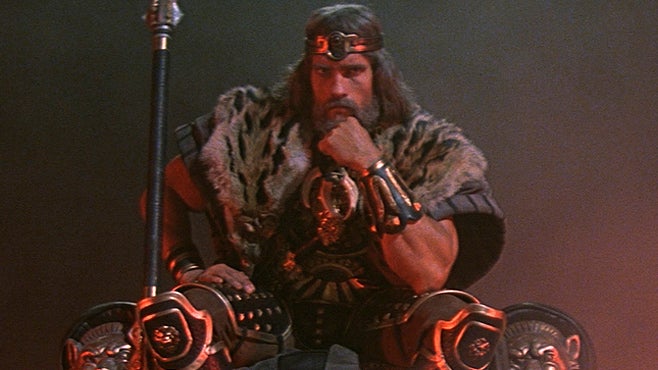 Arnold Schwarzenegger has provided a status update on The Legend of Conan, his much-anticipated return to the world of swords, sorcery, and furry underpants.

The Legend of Conan, which will continue the continuity established in Schwarzenegger's original 1980s Conan series (and ignore the 2011 Jason Momoa reboot), is apparently in its final stage of re-writes with a fall filming date scheduled. While Schwarzenegger isn’t sure if that will line up with his own schedule, he did promise that The Legend of Conan will be a film well-worth the 30-plus year wait.

“I can tell you is that it’s unbelievably well written. They’re still tweaking the end but it’s going to be very very powerful. What’s important on this project is they don’t look at it like, ‘Oh this is kind of a sword movie, where they just kill each other, and let’s write it off as a b-action movie.’ They treat it as like, ‘This is a very important movie for us, and we want to make a lot of money with this, it has to be the best quality.’ So the way they treat it is different than in the old days. Now, they see that it is one of those event movies that can come out in the summer and they treat it totally differently.”

And when asked if The Legend of Conan would kickstart a new trilogy for the Barbarian, Schwarzenegger admitted that he nothing about those plans.

“I never heard that, no,” he told Entertainment Weekly. “Even though that is a popular thing to do: ‘Why don’t we just shoot all 12 movies together! Let’s just go on the set now and stay there for the next 18 years!’”

Are you excited for The Legend of Conan? Let us know in the comments below!