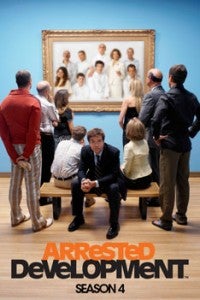 Less than two weeks after a series of fake, Arrested Development-themed titles began showing up on Netflix to promote the forthcoming fourth season of the long-cancelled sitcom, a Fox press site briefly posted a look at the fourth season that suggests fourteen new episodes will debut on the popular streaming-video site on May 4.

The entry has since been removed from the Fox Fast website, but gossip blog Oh No They Didn't got some screen grabs, as well as a look at the season four key art poster. The poster, notably, shows the family gathered around a portrait of themselves that may be a parody of key art used for the hit sitcom Modern Family.

Each episode is named after one of the characters, with Michael, George Senior, Lindsay, George Michael and GOB getting two-part episodes. Other episodes will revolve around Tobias, Maeby, Lucille and Buster. Initial reports were that each character would get their own episode, followed by a "season finale" that saw the whole family get together, but no such "family" episode is listed on the screen captures.

All of the Bluth family members as well as most of the character actors who had roles outside of the principal cast will reportedly return for the fourth season, although Martin Short has denied involvement. Ron Howard, one of the series' producers, will return as the narrator.

In early December, showrunners announced that the series's ten-episode season four order would be expanded to fourteen, and have left open the possibility of further seasons to come, should the show be a hit on Netflix.

Marvel's What If...? Watcher Featurette Released

The Owl House: Luz and Amity Are Girlfriends and the Internet's Loving It

Lucifer Season 6 Poster Reminds Fans the End Is Near