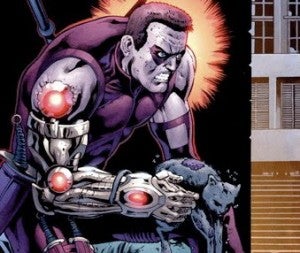 Colton Haynes, formerly of Teen Wolf fame, will join the cast of Arrow as Roy Harper, better known to comic book fans as Speedy/Red Arrow/Arsenal, according to TV Guide. "We were big fans of Colton from Teen Wolf and we are thrilled he's joining Arrow," said executive producer Greg Berlanti in the report. The CW suggests that the character will be brought in at least initially as a love interest for Oliver's sister Thea (meaning that last week's speculation wasn't that far off) and describes Harper as "a handsome, street-savvy, teenager from 'the Glades,' the harsh, poverty-stricken portion of Starling City." They also say he is "destined to become a significant part of [Thea's] life and an important player in the larger world of Arrow." In the comics, Arsenal currently stars in the series Red Hood and the Outlaws. There, hsi most notable romantic interest was the supervillain Cheshire, with whom he had a daughter. That daughter, as well as the relationship, seem to have been removed from continuity as a result of the New 52 relaunch.