This week's episode of Arrow went widescreen with the stakes, but fairly intimate with the actual action relative to what we've seen recently. As such, many of the Easter eggs this week are really just retreads of existing stuff (not unlike what last night's episode of Marvel's Agents of S.H.I.E.L.D. did). We'll run down the characters who reappear after an absence, though, and the handful of other little things we spotted.

Barry Allen name-drop With the pilot for The Flash set to be a huge topic of discussion at The CW's upfront presentation soon, it's not surprising that even without a cameo by any of the cast (as we had two weeks ago in "The Man Under the Hood"), we can feel the spinoff's presence here. When we have the sedated Roy dozing/unconscious in the Foundry, Felicity says he reminds her of Barry Allen -- who's in a coma, waiting for his own show to start, having had his origin as The Flash in the Arrow episode "Three Ghosts." 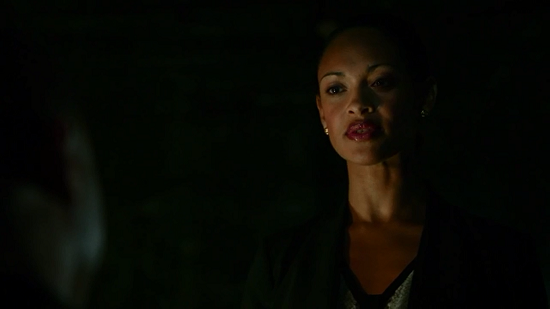 A.R.G.U.S. and Amanda Waller Hey! Remember "Suicide Squad," from a few weeks ago? There's Amanda Waller, the woman in charge of Task Force X, at A.R.G.U.S. Headquarters (A.R.G.U.S. is a bit like DC's version of Marvel's S.H.I.E.L.D., except less corrupt and still operating). Diggle doesn't have any favors left with her, but the last time we saw her, it seemed she, Oliver and Slade had some kind of shared history that might come into play over the next couple of weeks. Those patches on a number of the A.R.G.U.S. uniforms we saw are evokative of the ones we've seen in the comics fairly recently, too -- notably, one on a future version of Booster Gold who traveled back to talk to his younger self, and then disappeared due to some kind of damage to the timestream. Felicity and her darts Back in "The Scientist," Felicity shot Barry Allen with tranquilizer darts in order to take him to the Foundry quickly and without resistance, and without telling him who Oliver was until it was too late for him to say no to saving his life. So it probably should have been pretty obvious as soon as Ollie took that dart to the neck that it wasn't the bad guys doing it... Murphy vs. Dunleavy Over at the DC Wiki, the only Dunleavy we could find that might rate a wink and a nod on Arrow is a character from Smallville...but the chances that's the reference here seems pretty remote. For Murphy? It could be Murphy Anderson, one of the great DC Comics artists of all time (and somebody whose last name wouldn't make it as obvious there was a reference at play). There's also the chance it's a DC character...one Murphy -- J. Daniel Murphy -- was the head of prison guards at Belle Reve prison and was at one time a member of the Suicide Squad. 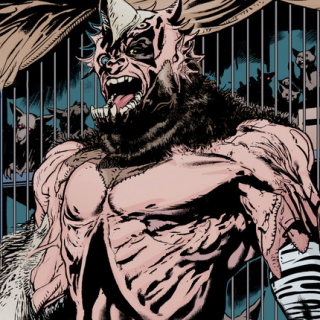 Clinton Hogue Clinton Hogue appeared in Animal Man by Jeff Lemire -- the current writer of Green Arrow for DC Comics. Hogue is a follower of Brother Blood in the comics, making his association here ring true. In the New 52, Hogue is a hideously deformed being and the leader of the Splinterfolk, a group of radical animal rights activists who became bizarre man/best hybrids in their attempts to bond with The Red by any means necessary. 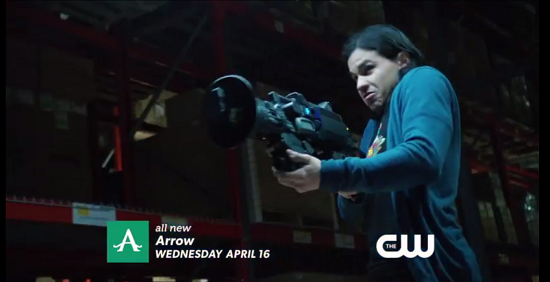 Cisco Ramon The teen-aged Justice League member known as Vibe, Cisco Ramon in the TV series doesn't have any powers (at least not yet), but works at S.T.A.R. Labs with Caitlin Snow (Killer Frost) and Dr. Arthur Light, both of whom are supervillains in the comics. He appeared in the episode "The Man Under the Hood," along with Snow, and the pair -- who will be series regulars if the Flash spinoff pilot goes to series -- are the ones tasked with developing an antidote to the Mirakuru. So...when we get a call from him just as everything is going to heck? Hopefully that's good news. Oliver comes out It's interesting; this season, we've seen Oliver's secret identity outed by Slade, we've seen some people just...figure it out...and we've seen Barry Allen led into the Foundry by Felicity while Oliver was on the edge of death. One thing he hadn't really done this season was TELL people who he was; there were just a lot of new people finding out one way or another. So...of course it makes sense that he sits down across the table from Brother Blood and tells him who he is. Probably a pretty safe bet Blood doesn't make it out of the finale alive, then, as it would be difficult to take away his political dream, and his dream for the city, leaving him in jail and with nothing...and trust him to keep the Arrow's secret.