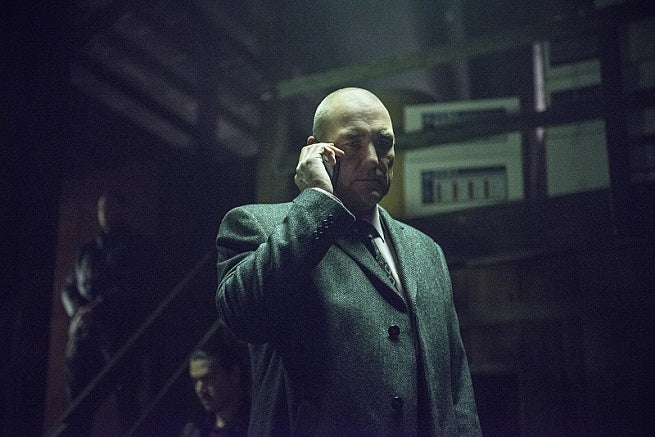 Tonight's episode of Arrow was pretty Easter egg-light, but that doesn't mean there weren't any.

Read on to see what we spotted, what we missed...

...and of course to go into the comments and call us out on stuff.

This hasn't been explicitly name-dropped in a while, so even though it's not new, I'm grabbing it: Nanda Parbat is the home to the League of Assassins, a secret city in the DC Universe.

As far as I can tell, there's no Mayor Castle in the comics...but did anyone ever think that she's maybe all these corrupt and/or ineffectual mayors might lead Oliver to try his hand at politics, like in the comics?

We get our first official confirmation, unless I'm misremembering, that the A.T.O.M. suit is powered by Dwarf Star Alloy, like in the comics.

Hard light constructs are not unfamiliar to DC Comics fans: it's what Green Lanterns, Bunker and other super-characters use to make blasts that are percussive and concussive without heat.

Sarab, Maseo's League of Assassins name, literally means "Phantom." It may just be a metaphor for how he's dead in the comics, or it might be that he's one of a handful of memorable Phantoms from DC lore...

It may be nothing...but Alaina Huffman portrayed Dinah "Black Canary" Lance on Smallville, and this was a very Black Canary-centric episode.

Again, this has come up before but it's been a long while so it's worth mentioning: Belle Reve is a prison in the DC Universe.

This is significant for two reasons: First, "Red Arrow" was a name that Arsenal took on at one point and used during his tenure in the Justice League when Canary was in charge.

That itself is kind of a(n unintentional?) metaphor for tonight's episode, but beyond that, it also opens up the possibility that when Oliver is back on the streets, he'll be the Green Arrow rather than just Arrow.

I don't believe for one second that "Kent St." is a Superman reference, but any time there's even the remotest possibility that Batman or Superman have been referenced on Arrow or The Flash, we get bunches of comments about it, here and on Facebook. So, yes, we heard that.

You forgot that Thea was reading by Brad Meltzer (Book of Fate).  He created a six-issue story arc in Green Arrow #16-21 and wrote the Identity Crisis.