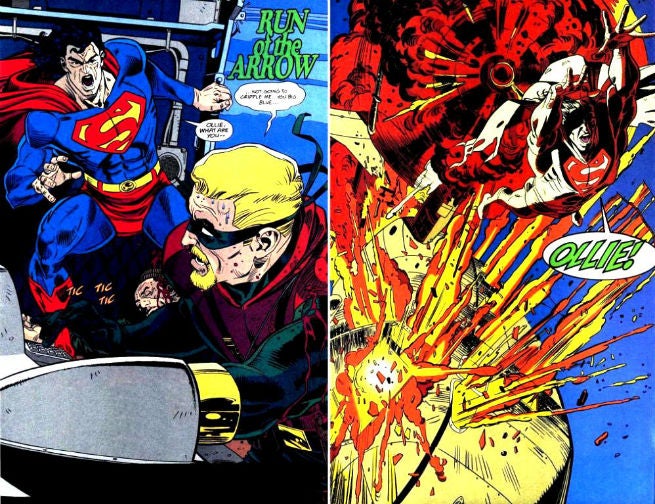 There were a TON of DC Comics nods on Arrow's season finale tonight.

We'll skip over The Flash, since that's just obvious.

But, other than that...what did we see? What did we miss?

In Green Arrow #101, Oliver Queen actually died exactly that way. An environmental terrorist group that he was infiltrating sent him up in a helicopter above Metropolis with a bio-weapon. Ultimately he killed himself by setting off the explosive meant as a propellant, too high to harm anyone.

He failed this city

I forget...is that the first time he's said that in the flashbacks? Timeline-wise, it almost seems like it has to be. 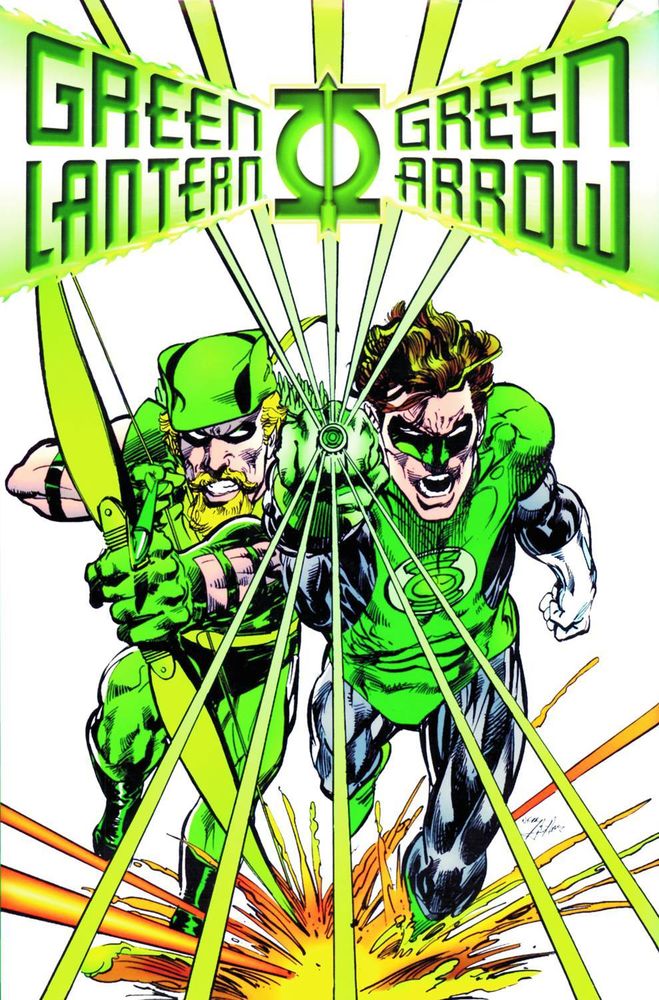 Besides the always-present 52nd Street nod, that series of locations and addresses when they were looking for Ra's mentioned the corner of Adams & O'Neil -- that would be Neal Adams and Dennis O'Neil, the artist and writer behind Green Lantern/Green Arrow.

The H.I.V.E. leader generally expected to be the Big Bad in Season Four gets to make his first appearance here.

Hard not to notice that a H.I.V.E. member uses a chess metaphor -- as though they were related to Checkmate or something.

I did it ten minutes ago

Again, likely not an intentional reference...but there will be fans who think that's a Watchmen/"I did it thirty-five minutes ago" reference.

Captain Lance is very upset about the Andreyko case -- presumably named after Marc Andreyko, whose character Manhunter bears a striking resemblance to the DA-by-day, vigilante-by-night thing that Laurel has going.

"The city's under attack? Must be May!"

A little season finale humor for you.

Hey! Apparently Felicity has listened to the opening monologue! 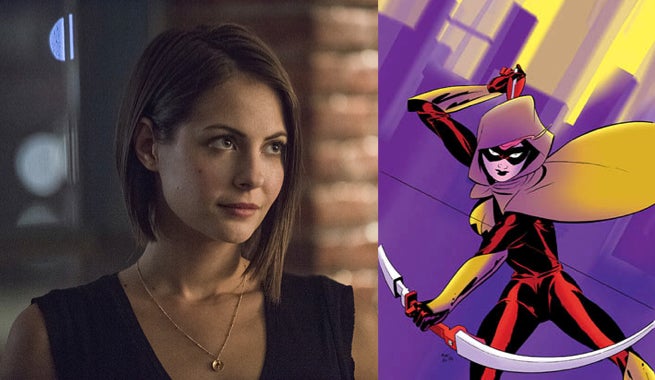 We touched on this last week -- but Thea finally lives up to the Dearden part of her name and becomes Speedy this week.

There's an argument to be made that they've been building to that since the pilot, since in Season One she had archery trophies visible in her room.

Has Ra's always called Oliver "boy?" It seems like that's what all his enemies call him.

We had a pretty bad one of those in Forever Evil, and of course Ray's ex used his power belt to commit murder in Identity Crisis. Maybe it's time a woman in the Atom suit did some good.

We've mentioned Coast City a BUNCH in these stories, but it's worth mentioning again. Why? Because the implication is that Oliver will actually BE in Coast City during Season Four's flashbacks. And there's that test pilot mentioned last night on The Flash...!

The name of the ship that would bring Oliver Queen to Coast City? "Triton's Daughter." Triton is part of the Greek Pantheon, and so has ties to Wonder Woman -- he's also the son of Poseidon and a sometime adversary to Aquaman.

After Arsenal, this is the name Roy Harper took in the comics. It's also the name that Oliver's son Connor Hawke uses in Earth 2.

The Atom in the comics, of course, is a hero who can shrink himself down to microscopic levels. That he finally started on the miniaturization process and the unstable White Dwarf Star in his belt exploded and took out the Palmer Technologies building is strange...but leaves open a lot of possibilities, including that he himself shrunk and somehow avoided death that way. Without a costume or the ability to regrow at his disposal, he could become trapped like in Sword of the Atom, a story actor Brandon Routh has said he would like to one day do.

Even if not, there's plenty of other ways he could come back. More on that later...!

Arrow: Easter Eggs and DC Comics References in "My Name is Oliver Queen"