Tonight's game-changing episode of The CW's Arrow certainly felt like it belonged in the DC Universe -- there was some well-worn territory that they gave us, and a major hint of things to come that virtually guarantees some comic book fans were sitting on the edge of their seat waiting for a reveal that's unlikely to come until Season Three. TEXT 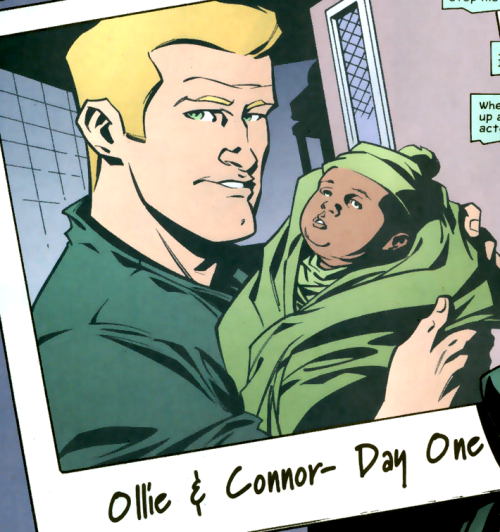 Connor Hawke Oliver Queen has an illegitimate son in the comics. Yes. And that son -- Connor Hawke -- was at one point Green Arrow for a time when Oliver was dead (he got better). The product of a brief but passionate relationship with Sandra "Moonday" Hawke, Oliver didn't become close with his son until years later, when the two met at an ashram. In the comics, he had been present at the birth of the child (seen above), but had run from the responsibility of being a father and ultimately pretended -- even after Connor's identity was revealed to him -- not to have known that he had a son until much later, when he discovered that Connor already knew and had forgiven him years ago. "Comic book strong" After being injected with the Mirakuru, Roy was "comic book strong." Get it? 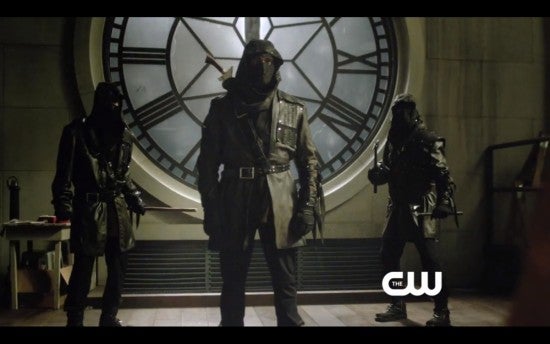 The Clocktower The Birds of Prey's clock tower makes another appearance, its first in a while, as Roy wanders through some of the familiar locales in his addled brain. The clocktower (and Sin, for that matter!) hadn't been seen much recently but made a reappearance in this episode, with Roy facing down Arrow and Canary there. Could this turn out to be a recurring locale in Season Three, with the Queens stripped of many of their resources and the Foundry having already been compromised at least once by Slade? Fugitives! Not only does Roy kill a cop, which is not generally the way to keep yourself off the radar...but then to use Oliver's arrow to do so? Well, I guess damning evidence against you is one of the costs of having your trademark be a projectile. 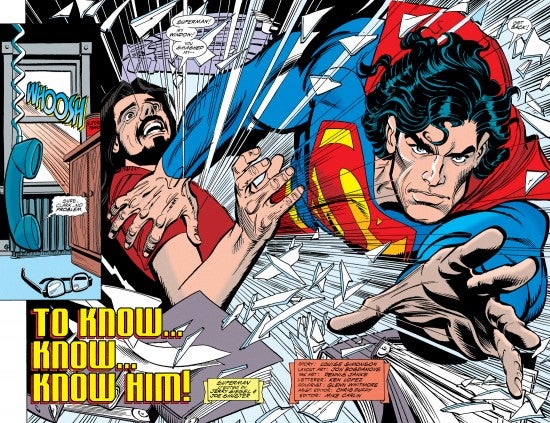 "I Know!" This probably wasn't intentional, but all I could think of when Moira told Oliver that she knew he was The Arrow was the Superman villain Conduit. "I know," she said, and then repeated that -- just that -- a number of times. That was the ambiguously-threatening note that Clark Kent was getting via mail, e-mail and finally a Superman doll pinned to his apartment door with a giant knife, after Conduit -- a Smallville meteor freak with a mean-on for Clark Kent -- deduced his identity. Ultimately, it led to the storyline titled "The Death of Clark Kent." The baby is in Central City Not only does Oliver have a baby, but the mother fled to Central City to avoid him and raise it with her millions? That seems like a potentially great reason to have a crossover with The Flash. 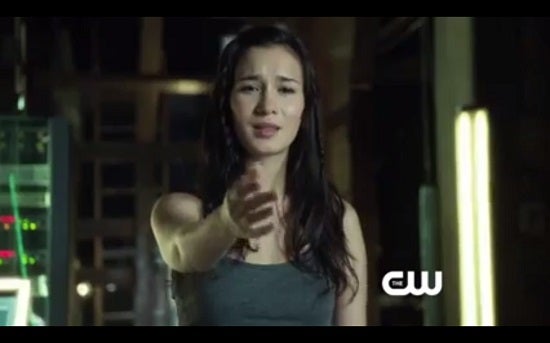 Ghost Thea This isn't the first time we've seen these hallucinations, let alone the first time we've seen the brought on by Mirakuru. Besides the episode "Three Ghosts," in which Oliver saw...well, you get it..., over the last few weeks we've figured out that Slade is being guided on his spree of violence by the specter of an angry and cruel Shado, who is telling him to kill to avenge her. "Unless you're in Tibet..." So they talk about how difficult it would be to get Tibetan Pit Viper venom in large quantities, unless of course you were in Tibet. Wait, is that a Nanda Parbat reference? It's been referenced a few times as being there. It was shortly after that Sara started to get cagey, so maybe the "friend" she's headed to see is Nyssa Raatko, who can enlist the aid of the League of Assassins to solve their Mirakuru problems. "I just care about you too much to be with you." That's the same thing Oliver said to Laurel last year, isn't it? Weird that it would be turned around on him by Sara, except that it isn't, really -- Ollie says in this episode that Sara reminds him a lot of himself last year, so he should have recognized that as an obvious defense mechanism and responded accordingly. Oliver Queen: Orphan In the comics, of course, Robert and Moira Queen have played almost no role whatsoever, and Oliver has always been written as somewhat more adult (even if he was an immature playboy) when he was shipwrecked and subsequently became Green Arrow. In the TV series, they've been given much more substance, and as a result we've felt their loss quite a bit more. It makes sense, coming from a youth-skewing network like The CW, where most viewers haven't lived through the loss of a parent.