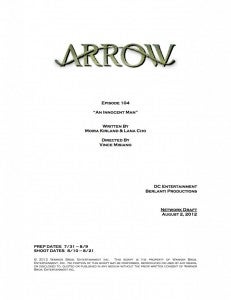 Earlier in the week, a Green Arrow fansite reported that the fourth episode of The CW's upcoming series Arrow would be titled "Salvage." They've got an insider in the production that sometimes leaks them exclusives, so this was pretty ironclad.

Except that, apparently, the studio changed their mind. The same site reports that the episode will now be titled "An Innocent Man," and they've got a scan of the script's title page to prove it.

The episode, which follows on the heels of Deadshot's episode three appearance, will be written by Moira Kirland & Lana Cho, and directed by Vince Misiano, according to the title page.

The only other information available about the episode so far comes in the form of rumors and speculation from the site's spoiler subpage:

"It sounds as though Oliver’s bodyguard Diggle will learn the truth about him sooner rather than later," they say, adding that "producers have a plan for dealing with the history of Laurel’s mother, who is not mentioned in the pilot."