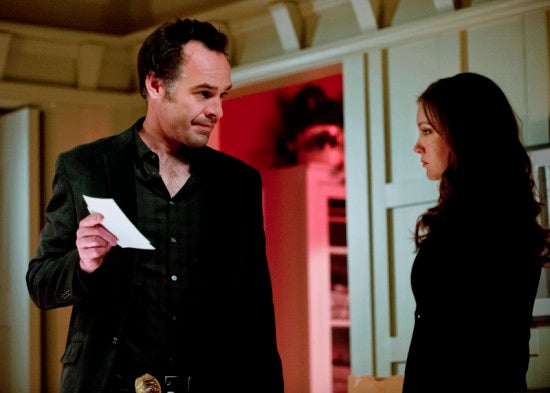 In an interview with Quiver: The Green Arrow Podcast yesterday, Arrow star Stephen Amell revealed that the eleventh and twelfth episodes of the show's second season--set to air in late January--will revolve around the Lance family.

The episodes, titled "Blind Spot" and "Tremors," will revolve around Laurel Lance specifically and the Lance family itself, respectively, according to the actor, who extolled the virtues of his cast, noting that many of the supporting players, including guest star Grant Gustin's Barry Allen, have had episodes that basically revolved around them as much as or more than Green Arrow this year.

He also teased that he knows something about Felicity Smoak's TV backstory and that he's eager to reach a point in the story where that backstory can be incorporated into the show.

Not much is known about either of the Lance-centric episodes, as episode synopses haven't yet been made public beyond January 15's "Blast Radius," which will feature the DC Comics villain Shrapnel. Nicholas Lea, best known for his role in The X-Files, will first appear in "Tremors" and is reportedly going to cause major problems for a member of the Queen family.

Laurel's storyline so far this season has been perhaps the show's most perplexing; without the unrequited love angle that they used last year, Laurel's character has been struggling to find a new direction. A substance abuse subplot appeared for a couple of episodes but then abruptly stopped (in fairness, the actress's real-life father had a high-profile drunk driving arrest not long before her character did, which might have been uncomfortable) and her story has seemed focused on a blooming relationship with Sebastian Blood. If she were to find out what he's secretly doing after hours, it could plausibly send her into a tailspin again, although that seems an unlikely way to go.

The show's thirteenth episode, titled "Heir to the Demon," will feature Ra's al Ghul's daughter Nyssa Raatko. Speculation that the story would revolve around Sara Lance now seems more well-founded than ever.

Arrow: Episodes 11 and 12 to Revolve around the Lances