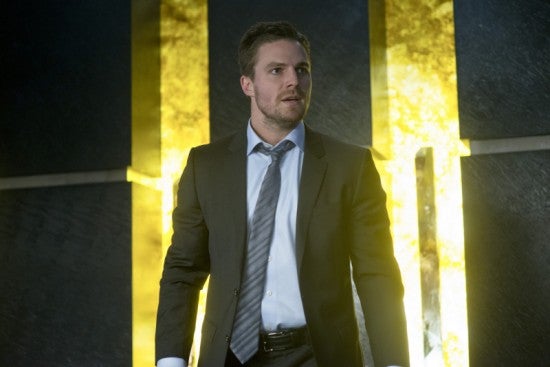 Ahead of tomorrow's Slade Wilson-centric episode of Arrow, The CW have released a sneak peek at the episode, accompanied by comments from series Executive Producer Marc Guggenheim, who says that the series will never be the same after tomorrow's installment, titled "Deathstroke." With Thea Queen in Deathstroke's clutches, a message sent out via a video message at a Jason Blood campaign event asks, "How much is Thea Queen's life worth?" Both as Oliver Queen and as Arrow, series lead Stephen Amell is forced to deal with that. "We wanted episode 18 to feel like a season finale," Guggenheim explains in a video interview embedded below. "And it really does. It was the episode where we tried to really pull out all the stops and make you feel like you actually watched a season finale even though there's five more episodes to go in the season. Everything is heightened, all the stakes are huge and Willa Holland will just break your heart in this episode." Meanwhile, not only does Isabel Rochev pop back up again (seemingly to help Oliver in the clip attached, but we've seen photos from the episode that seem to suggest otherwise), but a member of Team Arrow is said to go to the hospital...and it's starting to sound more and more like Sara Lance might not make it out of their battle with Deathstroke alive. "And because episode 18 doesn't have enough going on in it, it also features the return of the fantastic Summer Glau as Isabel Rochev. We take their relationship into unexpected territory." Guggenheim adds, "Laurel will never be the same after this episode. The Queen family will never be the same after this episode. Team Arrow suffers a very devastating loss as a result of this episode." Arrow is back at 8 p.m. tomorrow. Check out the preview video and some more comments from Guggenheim below.