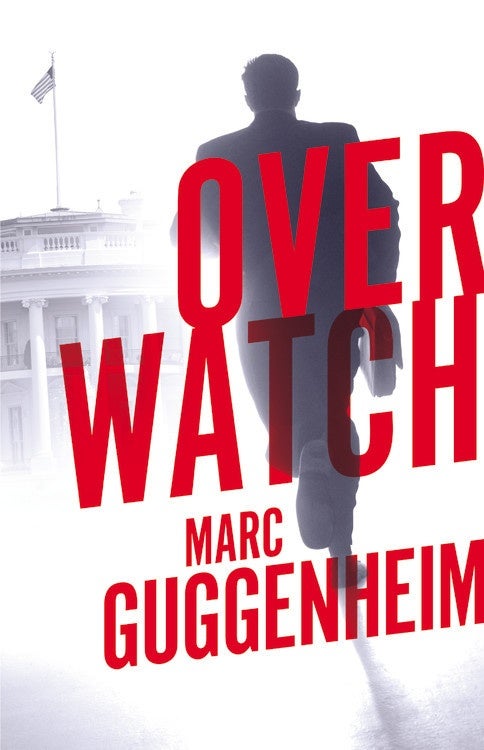 Executive Producer Marc Guggenheim, whose experience outside of TV has included a number of comics including Flash: The Fastest Man Alive and Wolverine, releases his first novel today.

Overwatch is a kind of hybrid legal thriller and espionage drama, with its lead character -- attorney Alex Garnett -- stumbling into a web of conspiracy and intrigue that leaves his father, a former Chief of Staff and Solicitor General to two presidents, looking like a pretty good candidate for the assist. Instead, Garrett turns to a paranoid hacker and starts unraveling a decades-old conspiracy.

Guggenheim joined ComicBook.com to talk about the project. You can get a copy here and watch the book's trailer below.

ComicBook.com: It's funny, because you see so many attorneys who turn to entertainment and write about attorneys. Do you think that, like doctors, this is just a field where you enter into it and amass so many crazy stories that nobody else can be as convincing?

Marc Guggenheim: That's a great question.  I'm tempted to say it's because writing requires research.  Writing a novel -- as opposed to a screenplay or teleplay -- requires a massive amount of research.  And if you've spent a number of years studying and working in a particular field, well, that's one less field you don't have to research.  I say this with tongue partially in cheek, but the collective "they" advises beginning writers to "write what you know."  There's a significant amount of wisdom in that.  Plus, it's no secret that my first two gigs as a professional writer involved writing about lawyers.  And here I am with my first novel and the protagonist is an attorney.  I'm currently writing on a show called Arrow and one of the main characters, Laurel Lance, is an attorney.  When we originally pitched the series to the network, I joked that we decided to make Laurel a lawyer because "I'm contractually entitled to one character per series that's easy for me to write."  Again, my tongue was firmly implanted in my cheek, but often a truth is said in jest.

But in all seriousness, I also happen to have a deep affection for dramas involving lawyers.  L.A. Law and the writing of David E. Kelley were huge -- massive -- influences on me, both as a lawyer and a writer about lawyers.  I'm a huge fan of Scott Turow's writing.  I love stories involving lawyers and the law because it's a subject matter I'm genuinely interested in.  And I always try to write about subjects that interest me.  That seems the sensible thing to do.  It's only a matter of convenience that I have experience as a lawyer that helps me write about them.

ComicBook.com: Do you ever follow Brad Meltzer's work? The two of you tend to cover a lot of the same ground and if you're getting into novels, it's got to be hard not to say, "Yeah, I'd take his level of success."

Guggenheim: I love Brad.  I mean this literally.  We've been friends since I first came to work on the show he co-created, Jack & Bobby.  One of the reasons we're friends -- and there are many -- is that we share very similar backgrounds -- both personal and professional -- and sensibilities.  We're both attorneys.  We're both huge comic book fans.  We both love writing.  Funny (good lord, let it be funny) story:  When I was still in law school, but already thinking about making the leap to writing, I read a profile USA Today did on Brad.  I still vividly recall reading the article, about how Brad went from attorney to author, and thinking, "That's something I'd really love to do some day."  This was years before Jack & Bobby was even a gleam in Brad's eye, years before we'd meet and work together.  It's just funny how things work out.  All that said, while I'm -- as you point out -- working the same side of the street as Brad, he's a true craftsman and a master of the form.  I don't feel like I'm worthy of any comparisons to him.

ComicBook.com: Obviously, the book is still a ways off and it's not a comic or a movie where there have already been dozens of trailers and preview pages. What's your elevator pitch for this story?

Guggenheim: I'm not much of an "elevator pitch" writer.  Most of the things that come out of my head aren't really amenable to an elevator pitch.  Overwatch, however, is an exception.  I have a few different elevator pitches:  "It's what a love child between Tom Clancy and John Grisham would look like."  "It's The Firm in the CIA."  "It's Lincoln Lawyer meets Jack Ryan."  Hopefully, one of those will entice your readers to give the book a look.

ComicBook.com: Very much like when Hollywood people head into comics, are you facing a lot of people who just think you're writing so you can adapt it to film later?

Guggenheim: Fortunately, not yet.  No one at my publisher, Mulholland Books, has asked me.  Maybe it's because writing a novel is such hard work.  If I wanted to tell this story as a movie, there are much, much, much easier ways of me getting the project going than sitting down to write a novel over the course of several years.  It would be like trying to get into a major league baseball stadium by trying to become a professional baseball player rather than just, y'know, buying a ticket.  There's also something to be said for the fact that I've spent years working on Overwatch.  If someone does want to turn it into a feature film, it might be best for me to step aside so that someone with fresher eyes than mine can tackle the material.

ComicBook.com: That said, if Alex survives this book, would the idea be to give him a franchise or is your approach to novels more to tell a story and move on to the next batch of characters?

Guggenheim: I'm a huge fan of Tom Clancy and the world he created.  I've really enjoyed -- and will profoundly miss now that Mr. Clancy is gone -- returning to his "universe," over the course of several books and decades to see how his characters have evolved.  I'd love to have the good fortune to take Alex and his supporting characters on a similar journey.  I've even played with the notion of reducing Alex to a supporting character in some future novel à la the way characters come to the fore and recede into the background in Scott Turow's novels, or even the way Jack Ryan did in Clancy's Clear and Present Danger.

Bottom line, I like the idea of evolving and growing this world and cast of characters over successive novels rather than just throwing them away and starting with a whole new cast.  Of course, that approach only works if my next novel is set in the same milieu.  Alex is a very innovative guy, but I don't think he'd fare to well in, say, a sci-fi novel.

ComicBook.com: Between TV and comics, you've written a lot of serialized fiction. How does that inform work on a novel?

Guggenheim: I've planted some very minuscule seeds in Overwatch which could germinate into serialization, but the novel, like any novel, has to stand on its own.  It has to tell a singular story, with a distinct beginning, middle, and end.  Given that, my television and comic work hasn't been particularly helpful as far as being serialized goes.  Where that experience was of utility is that both mediums train you to grab the audience by the throat from the very beginning and to not let go no matter how hard your fingers hurt.

ComicBook.com: Is it a welcome challenge creating characters from scratch as opposed to working with established properties?

Guggenheim: I love doing both.  And I'm very fortunate that I get to do both.  To me, each have their pros and cons.  I love playing in established sandboxes, particularly when, as with Arrow, the sandbox contains toys I grew up with and have a great affection for.  At the same time, however, I do enjoy creating my own characters and, hopefully, adding something new to the cultural tapestry.  Like I said, I'm very lucky I get to do both.  If I had to choose between the two, it would be very difficult for me.  To be honest, I don't know which way I would go, because I love both alternatives with equal passion.

ComicBook.com: Is it, on the other hand, a little daunting to realize that nobody comes into this already determined to like Alex Garnett, like they do with Arrow or Wolverine?

Guggenheim: I'll let you in on a little secret:  Popular culture is so fractured these days, there is so much content for readers and audiences to choose from -- be it film, TV, comic books, or books -- that no matter what, breaking through all the static and finding an audience is a daunting proposition.  In Hollywood, there's a current preference -- I would say "fetish" -- for properties with what they call "pre-awareness."

With awareness, however, comes the potential for bias.  To take Arrow as an example, I'm sure that there are a lot of people who wrote the show off as "a comic book show."  So that pre-awareness is a double-edged sword.  You hope that you are attracting more people than you risk turning away.  At the same time, however, you're right that there isn't any pre-awareness to sell a book like Overwatch.  In this instance, I'm relying on good word of mouth to move the book.  It's just me out on the stage by myself -- mostly naked -- hoping that the dance I'm doing is sufficient to get the sailor to throw money.

ComicBook.com: The way Garnett is described on the Mulholland website raises a question: Is he someone who is uncomfortable taking his father's help, but equally unable to reject it?

Guggenheim: Alex's relationship with his father is one of the core elements of the novel.  For some reason, I was intrigued by the possibility of a protagonist who, essentially, grew up in his father's shadow.  What is it like to be the son -- or daughter -- of someone incredibly accomplished?  Some kids don't even bother trying to match their parents' success.  But those that do try... I find them to be fascinating characters.  They're trying to match -- or exceed -- their parents, but it's something of a rigged game.  As the scion of success, they are always plagued by the self-doubt that comes from never being able to know whether their own success stems from the fact that they were, essentially, born on third base.  I figured you can't go wrong with a protagonist plagued by such self-doubt.  Speaking of self-doubt, I'd refer you back to my earlier answer re writing what you know.

But back to Alex.  You put your finger on his key dilemma:  Does he ask for his father's help?

I don't think I can answer that without treading into spoiler territory, however.