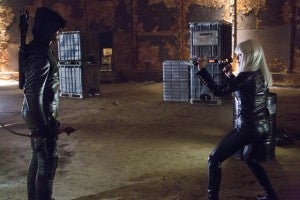 Kelly Hu was announced at San Diego Comic-Con International this year as appearing on Arrow as drug lord (drug lady?) China White, a character who figured heavily into the Green Arrow: Year One miniseries by Andy Diggle and Jock which was reportedly the inspiration for much of the show, which will debut in October on The CW. 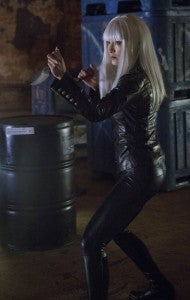 In the TV version, White has reportedly been stripped of her heroin dealer roots and is instead a mercenary in the employ of a gang of Triads, who will be trying to take out Laurel Lance and therefore run afoul of Ollie.

Hu/China White will reportedly appear in multiple episodes, but Zap2It pegs these as coming from episode two. They say, "In the episode, Oliver (Amell) has to go to the courthouse to get his death certificate repealed... you know, since he never actually died. There, he finds former love Laurel (Katie Cassidy), who is prosecuting Martin Somers, a criminal with ties to the Chinese Triad... and, well. Oliver Queen doesn't much like criminals."

The episode, titled "Honor Thy Father," reportedly will see Oliver beginning his mission to take down the names in his father's book in earnest (it's a bit like ABC's Revenge in that way, except that Amell is prettier), and Somers is one of them.

And before we get any crazy ideas, John Barrowman's role is still up in the air. The "Well-Dressed Man" will not be Somers, who will instead be portrayed by guest star Ty Olsson, according to KSite.