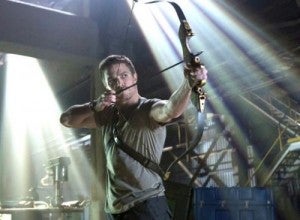 Come the fall, fans of sci-fi and fantasy have inherited Wednesday and Thursday nights on the CW network. Arrow, the Stephen Amell-starring adaptation of DC Comics' Green Arrow, will kick off Wednesday nights at 8 p.m., followed by fan-favorite show Supernatural at 9, launching in October. Thursday nights belong to Beauty and the Beast, the revamp of the Ron Perlman/Linda Hamilton series starring Smallville and Chuck veteran Kristin Kreuk. That show will air at 9 p.m. on Thursdays, following The Vampire Diaries, CW's top-rated show which airs at 8 p.m. The Ringer, the Sarah Michelle Gellar vehicle co-written by Noble Causes and Near Death writer Jay Faerber, won't be coming back next year, and Nikita will stay in the Friday "graveyard," where it managed fairly well last year, but it loses Supernatural in favor of America's Next Top Model as its programming partner.

Arrow Heads Up Two Nights of Genre Programming at CW