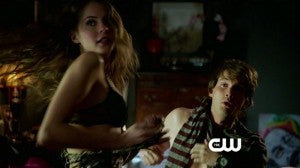 Coming with a new, extended trailer for "Year's End," Arrow's final new episode of 2012, is a batch of screen grabs over at Green Arrow TV, a couple of which show Thea Queen caught half-naked with...somebody. And, as the site points out (and it's hard not to see once you've thought about it), that guy kinda looks like Roy Harper, known in the comics as first Speedy and later Arsenal. And yes, Roy was a needle-drug user in the comics, but the first person to make the "putting a spike in Speedy" joke is in trouble. In terms of a midseason finale, introducing a character the magnitude of Roy could make a lot of sense, but it already looks to be a pretty crowded episode, with the Dark Archer showing up and killing somebody. That said, while many fans may have thought that Roy was a "further down the road" kind of thing, nobody at Warner Television or DC Entertainment has ruled the character out yet that we're aware of. And GATV was right-on when they predicted that John Barrowman would turn out to be Tommy Merlyn's dad. There's the additional question, of course, of exactly how useful it is to have Arsenal around in Arrow, given that the role of Ollie's second banana is filled pretty ably by Diggle. Still, prior to the launch of the New 52, DC had been playing up the importance of the "Arrow Family," including Black Canary, Arsenal, Connor Hawke and others, for a while. With the recent revelation that the network is casting a Shado for the series's upcoming fourteenth episode, it's entirely possible that Green Arrow's network will grow in the TV series to reflect something more in line with that philosophy. Check out the trailer yourself below and tune in on Wednesday at 8 p.m. EST.

Arrow: Is This Roy Harper?