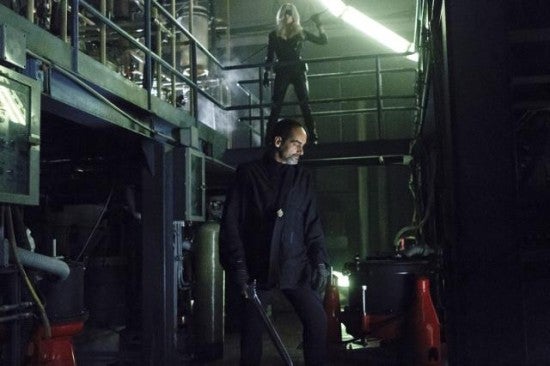 If there's one thing most people know about Ra's al Ghul and his daughter Talia, it's that you can't necessarily trust the credits before you first see the characters onscreen.

After all, Liam Neeson's Ra's al Ghul in Batman Begins was credited as "Ducard," a cover identity he used for part of the movie. Two movies later, Talia al Ghul had a similar trick up her sleeve when she posed as Wayne Industries investor Miranda Tate in The Dark Knight Rises.

Some of this was done for in-story reasons, while some of it was specifically to throw fans off the scent. But it does make us wonder about al-Owal (Arab translation "The First"), who is the first major villain to come out of Ra's al Ghul's League of Assassins and a recurring character on this season of Arrow.

Played by Homeland veteran Navid Negahban, little is known about the character so far other than the fact that he's got a mean-on for Canary--which pretty much all of the League will, if the episode before last is any indication. But those who have seen him on the Showtime terrorism drama know that he's got plenty of presence and wouldn't be a bad choice for Ra's...assuming that's a character we'll see on Arrow at all.

In fact, when TVLine revealed his casting, they referred to the "scimitar-wielding baddie" as having played a "deadly master terrorist" on Homeland. If that doesn't say Ra's al Ghul, it's hard to say what does.

In any event, it seems likely we'll see Ra's this season. We would have thought he'd be saved for a midseason finale or season finale reveal...but with the level of crazy that's been going on so far this season, it seems like they might not be pacing themselves quite as conservatively as we'd have expected at the start of the year.

Nod to Green Arrow TV for giving us the inkling. And one more thing while we're at it: If everyone is so convinced that Sara died (twice, now)...what are the odds there's a Lazarus Pit in play?