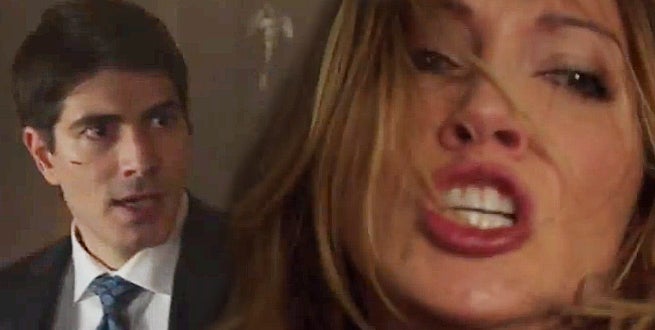 In it, city officials and the Police Department are discussing the crime spree Brick (guest star Vinnie Jones) has been on since he arrived in Starling City. Know the saying "speak of the devil and he shall appear"? Well that is what happens. Brick comes into the lion den to capture the city's Alderman and then orders his henchmen to kill everyone.

That is when Ray Palmer (Brandon Routh) and Laurel (Katie Cassidy) leap into the action. When it is all over Palmer quips, "See, that is my I need a techno-suit."

Arsenal (Colton Haynes) and Diggle (David Ramsey) confront Laurel (Katie Cassidy) about trying to step into her sister's shoes and warn her to stop before she gets herself killed. However, when Brick (guest star Vinnie Jones) kidnaps the city's Aldermen and threatens to kill them all unless the police evacuate The Glades, it's all suits on deck. Meanwhile, Ray (Brandon Routh) steps in to help Lance (Paul Blackthorne) and the police force fight Brick, showing Felicity (Emily Bett Rickards) a new side of her boss. Malcom (John Barrowman) tells Thea (Willa Holland) that Ra's al Ghul (Matt Nable) is after him and his family and they must leave town immediately.

Arrow is all new Wednesday at 8/7c!