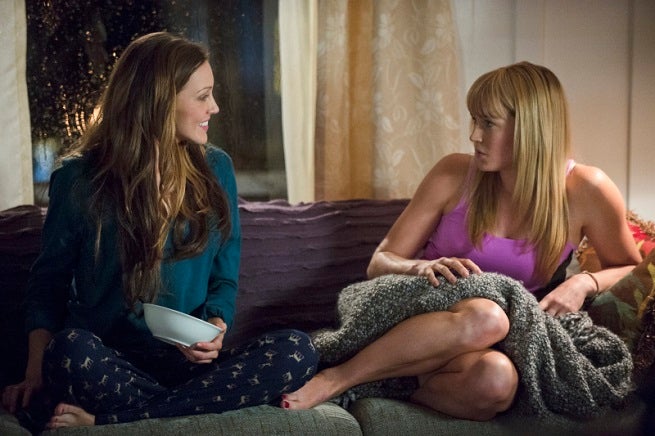 Upcoming episodes of Arrow will feature a "trilogy" about Black Canary, according to one of the series' producers.

Before last night's screening of the Arrow and The Flash crossover episodes, showrunner Andrew Kreisberg told The Hollywood Reporter that Arrow's tenth, eleventh and twelfth episodes of the season will revolve around Laurel's transformation into Black Canary.

"Laurel appears in the Arrow episode," Kreisberg said. "She's not as present in these episodes, but that is because we've been building up to her appearance as the Black Canary. We sort of said that Sara was the Canary, but Laurel is the Black Canary. Episodes 10, 11 and 12 are a three-part trilogy that are about her. And episode 13 I think I can spoil, is called 'Canaries.' For fans of Laurel and for fans of Katie [Cassidy], they're going to get more than their fill after the winter break."

The episode titled "Canaries" is likely going to be one that heavily features Sara Lance, the first Black Canary, whose murder in the season premiere has been driving most of the action this year on Arrow. The midseason finale, which takes place the week after the crossover episodes air, will be the ninth episode and revolve heavily around the murder mystery as Nyssa Raatko, the daughter of Ra's al Ghul and Sara's former lover, gives Team Arrow an ulitmatum: find and punish Sara's killer or face the wrath of the League of Assassins.

While Sara, played by Caity Lotz, died in the premiere and appeared only as a corpse in a few scenes from the season's second episode, producers have previously promised that fans would get more from Lotz, who has a multi-episode contract this year. They hope to do a story that explores the time between when she disappeared from Lian Yu at the end of Season Two's flashbacks and when she reappeared in Starling City at the start of Season Two.