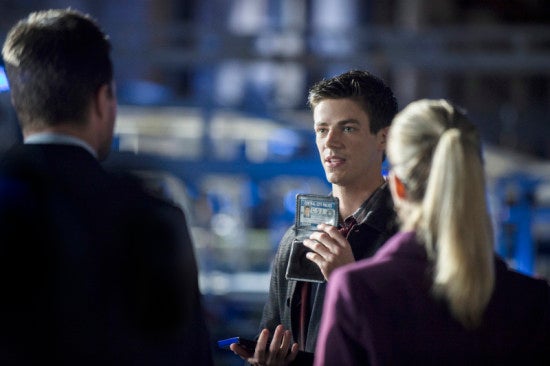 While DC Comics fans are ecstatic that Barry Allen will be appearing on Arrow, there has been a little bit of controversy surrounding the casting of Grant Gustin. Some fans have raised concerns that Gustin looks too young to play the Flash.

In this new clip from Arrow, even Oliver Queen pokes fun of Barry Allen's young age. When Oliver goes to investigate a break-in at the Queen Consolidated's Applied Science Division, he runs into Central City police scientist Barry Allen. Queen quips, "Do your parents know that you're here?"

Despite Oliver's concern over Barry's age, executive producer Andrew Kreisberg is confident that they cast the right Barry Allen. Kreisberg said, "We did an exhaustive search to try to find our Barry Allen, and it turns out he had been on Glee."

Arrow airs on Wednesday nights at 8 PM ET on The CW.