Warning: The article below contains spoilers for last night's episode of Arrow. 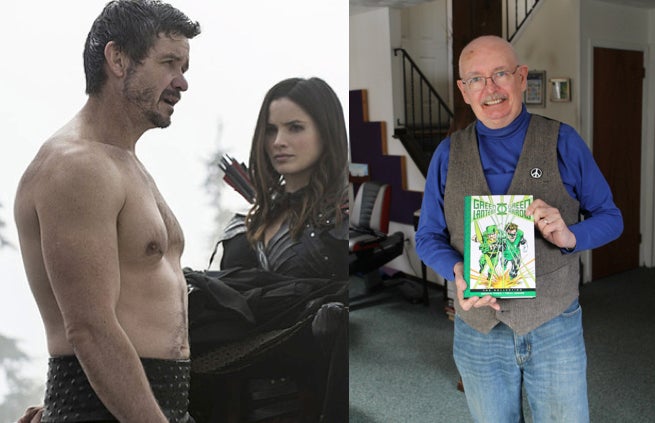 Few comic creators have given as much to the DC Universe as Dennis O'Neil has. During his nearly 50-year career with DC Comics, O'Neil has written, edited, and created a world of characters for DC Comics' library. But for all of his contributions, many remember O'Neil's classic run on "Green Lantern/Green Arrow" and his co-creation of Batman nemesis Ra's al Ghul as his crowning achievements. As fate would have it, both of his marquee characters were front and center in last night's midseason finale of Arrow, "The Climb."

As one of the foremost authorities on Ra's al Ghul, Oliver Queen, and honestly—comics in general—we called the legendary writer up to see what he thought of Arrow's re-imagining of the Green Arrow and DC mythos. Below, O'Neil shared his opinions on how Arrow handled Ra's, on Oliver's darker side, and how Arrow may escape death in the second half of Season Three.

On His Opinions of Arrow.
I was kind of slow to warm up to it. I had a lot of quibbles at first, but most of them have gone away. But the fact that I'm watching it means that I like it. I'm not always comfortable watching the stuff I've done translate into another media. But I would say that even without a comic book connection, I would watch Arrow—and all of the comic book shows currently on—for entertainment.

Ra's is a good villain for Batman, and Green Arrow is a Batman-scale figure. He's human, which makes for a good interchange. I paid a lot of attention to Ra's last night. I think the actor, Matt Nable, gets it. I think he's dignified. He's tough-looking, he's ruthless. That's about the way that character should be played. I don't have any qualms with the way he was written.

The writers didn't include his obsession with the environment, and they didn't involve the Lazarus Pit, which nobody has ever done. That was the most visual gimmick I ever came up with. Back before comics in movies and television were even a possibility, I thought "They'll certainly not miss the opportunity to show him emerging from this seething, boiling pit, crazy as a loon." But, I learned a long time ago that it's a mistake to try to take something from one medium to another, to take a comic book and throw it onto a television screen. You have to reinvent the story for your own medium.

And though I didn't create Nyssa al Ghul—Greg Rucka did— I thought she was a fine Talia. For such an incidental character, there have been a number of Talias already. She comes closest to the way I conceived the character. I think ideally she would be played by someone who's tall, stately, and obviously athletic. But this young woman, [actor] Katrina Law, could be Ra's' daughter.

On Oliver Queen's Duel With Ra's, and Whether Arrow Will Truly Die.

That took me totally by surprise, and that means the writers and the actors did their job. It looked like that scene was paying more of an homage to Christopher Nolan's movies than anything we did in the comics. What they did in a way, was recreate the sword fight between Ra's and Bruce Wayne in the Himalayas. That duel is in our comics, but we set it in a desert. And bbviously, the endings were quite different. If the Lazarus pit is in this continuity, that would be the way to keep Ollie alive. But if they don't choose to go that way, I suppose someone will have to rescue him. There's a lot of ways that they could take it.

On Arrow's Portrayal Of Oliver Queen.

Well, it's not our Oliver Queen. But that's not necessarily a condemnation, because the creators' jobs are to take a basic idea, and make television out of it. They're not supposed to cram old comic books onto a television screen. They have to reinvent it. I think that they improved Oliver's backstory immensely. And it being television, I understand why there's so much emphasis on family, both Oliver's biological family and his symbolic family with Felicity and Roy and Diggle. It's not the way we played him in the comics, but it's a perfectly legitimate way to do the character.

I'm a little irked by the amount of alcohol that's consumed. That is, of course, one of my hobby horses as a recovering alcoholic. I do think that positive role models behaving in a certain way does have an influence on adolescents. And it seems to be that someone who depends on athleticism as much as Oliver Queen does would not drink. I feel the same way about Bruce Wayne. Other than that, I think it does a fine job. I think that Stephen Amell is a good dramatic realization of what Green Arrow became in the comics.

On Making Oliver A Torturer.

In the current continuity, they seem a little ambiguous about torture. I thought they were going to follow an anti-torture creed, but they left it ambiguous, and then they switched the emphasis to the negative effects that torture can have on the torturer. But then, there was a scene in which the show seemed to say that because Oliver's character is so strong, he wasn't going to suffer the negative effects of torture. But I may be reading way too much into it. Torture does no good, and it is not worthy of civilized people to engage in that.

On Oliver's Evolution From Executioner To Superhero.

In the first couple of seasons, Oliver's cavalier attitude towards skewering bad guys did bother me a little bit. But the creators incorporated that into the show and made that part of the character, so they did right by it. I was made uneasy by it, but I have no reason to complain about anything that can be incorporated into a successful story. And that aspect of the character has been successful.

On How Creators of Comic Book Shows Are Getting It Right.

I think that there's been a learning curve, and that the TV community knows how to do this kind of fiction. I think that their first attempts were awkward, because they really didn't know how to tell these kind of stories. The current crop of TV people grew up reading our comic books. They've been a part of their aesthetic experience for their while lives, so they didn't have to get over the hurdle of "Well, isn't this stuff for kids?" They accepted comics as an equal with any other dramatic art form. They really know how to do these kind of stories, possibly better than we did.