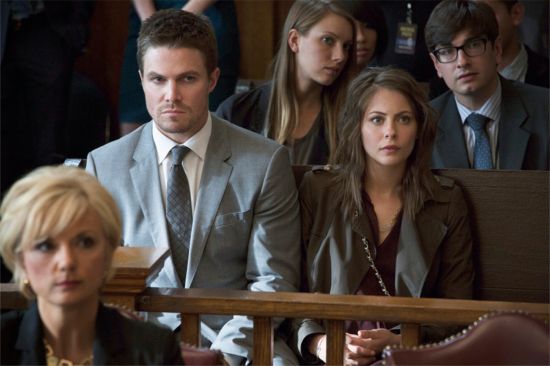 With a week off between now and when Barry Allen comes to Starling City and the DC Universe begins to creep into television, Arrow was off slightly from last week's season high, but still about on par with the previous week, which was the show's previous season high.

Arrow earned a 1.0 ratings and a 3 share, down two-tenths from last week's 1.2 adults 18-49 rating. The 2.66 million viewers was enough to be the third-best of the year, though, just under the 2.74 million the show rated the last time it scored a 1.0/3 on November 7. While "Amell Wednesdays" continue to be a success for The CW, it seems as though The Tomorrow People has finally broken its ratings connection to Arrow; for a while there, it went up and down with its lead-in, but the last two weeks it hasn't. That series matched last week's 0.6 adults 18-49 rating. The Tomorrow People stars Robbie Amell, the cousin to Arrow star Stephen.

When the series comes back on December 4, it will be arguably the most-anticipated episode since the series launched, with Barry Allen making his first CW appearance ahead of a planned 2014 Flash pilot. As part one of a two-part midseason finale, the episode will also feature familiar DC characters like Brother Blood and Cyrus Gold--the man who, in the comics, became the zombie-like powerhouse Solomon Grundy.