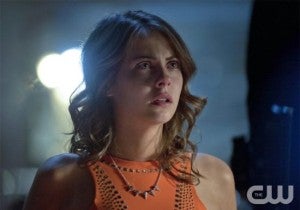 The episode begins on the island--Oliver is running and jumping, shirtless, through the underbrush when a plane arrives. The plane is being flown by an old foreign man, who seems to have very little control of the descent. Diggle and Felicity are on board, with Felicity scared of flying and Diggle trying to get her to bail out with him onto the island, since there's no safe place to land. They chute down together, and Felicity throws up on the beach. The pair pass the Deathstroke mask seen in the first season as they make their way into the tree line. As we've seen in the preview material, Felicity steps on a land mine and when Diggle goes to try and disarm it, Ollie swings in from behind on a vine, snatches her off the mine and it blows up, knocking them all clear of the scene but not hurting anyone. Oliver tells them they shouldn't have come. Back at his camp, Ollie is acting antisocial, and tells them that he's not going back to Starling--that he failed at his task in the first season becuase he couldn't stop Tommy's death. Diggle tells him that it's not about the Hood--that the family, and the business, needs Ollie. Grudgingly, Oliver agrees to go. Flashing back to the previous visit on the island, Oliver and his sidekicks get a ping on their radar and realize that even without Fyers, they aren't alone on the islend. In the city, Ollie sees a "vote for Blood" graphitti on the wall. Apparently he (Jason?) is running for alderman. Ollie gets the file on Isabel Rochev, who is mounting a hostile takeover to break down the company for parts. Ollie says he wants to go home to check on Thea, but she's with Roy--fighting with him because in the throes of making out, she sees bruises and realizes he's been out fighting with bad guys again. Ollie asks if Thea has checked in on their mother, and Thea says that she won't, since their mom is a mass murderer. In spite of Ollie's objections, she remains determined. STAR Labs is developing a reactor, apparently, per the news. The mayor is at a party, talking to District Attorney Donner; he's for the Hood and Donner is against. Laurel comes up, taking sides with the district attorney--her "new boss." He begins to make a speech and in the middle of it, someone begins screaming at hiim that he has failed the city. Gunmen come out from the wings and kill the mayor and a bunch of other people., then try to take the district attorney. Laurel kicks one down the stairs but ends up with a gun to her head. The gang, wearing hoodies and gas masks, identify themselves as "The Hoods." Office Lance shows up, only to be chastised by another cop for being there even when he shouldn't because he was demoted. Her dad checks in with her, and then Ollie checks in as well, bringing her off to the side to talk about how they dealt with Tommy's deaths. Laurel says she made a mistake sleeping with Ollie, and that she deeply regrets not being able to fix it now that Tommy is dead. Ollie tells her that he felt the same way about what happened to her sister during the wreck, and that he would do anything to take it all back. She hugs him and says she knows, but she can't. Outside, Ollie tells Diggle that he's annoyed Diggle tricked him into coming back to fight the Hoods. He refuses, saying he's going to focus on the company. In their hideout, the Hoods decide to target Ollie because they want to take out the decadent rich. At the bar, Roy Harper comes to talk to Thea, telling her that he thinks she should go see her mom. Thea says she won't, since her mother helped create a lot of orphans who don't have the option. "I'm not going to that prison; it's the only way I know how to hurt her," she tells him. He tells her that she should consider that it's hurting her as well. Ollie comes to Queen Consolidated the next day, and Isabel Rochev  tells him that he can't stop her from taking over Queen Consolidated; that the company has fallen and he doesn't have the money to stop her. The Hoods come into the meeitng and try to take Ollie; shey shoot up the room but Ollie gets Rochev and then Felicity free of the room, leaving Diggle in there with the shooters. Oliver apologizes to Rochev, saying that what happens there is his business. Officer Lance asks Felicity whether she's heard from the Hood, and she says no. Ollie isn't comfortable with the body count of being the vigilante, he tells his crew when the cops leave, and so that's why he can't be the Hood. He's upset that his best friend died thinking that he was a murderer. Felicity says that instead of killing them, he should just find another way to be Arrow. He leaves the room to find someone who will help him save the company. Flashing back to the island, Shado and Slade are helping Ollie track whatever's on the island. Shado leaves the group for a moment and vanishes into thin air. 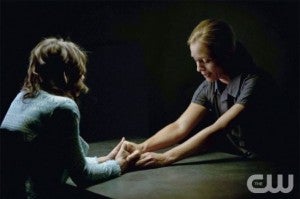 Ollie goes to visit his mother in prison, apologizing for not getting there sooner. He tells her that she saved hundreds of lives, and she tells him she still helped kill hundreds more. She asks how the company is, but he tells her about Rochev. She tells Ollie not to trust her--that she's dangerous. He tells his mother there are no good options and he doesn't know what to do. She tells him that it's a family business and he should reach out to family for help--and that she's not talking about Thea. Back at the bar, Thea tells Roy that she'll go see her mom when he stops going out at night and getting himself hurt. The Hoods take the club, threatening to star tkilling people until Ollie comes to them. Roy dives on one of the Hoods and takes one out but then another grabs Thea at gunpoint. They take her away. When the cops arrive, Ollie finds out what happened and excuses himself down to the Arrowcave. They've upgraded it in his absence. Felicity has been trying to track them since Ollie got back.  Ollie has them check for somebody who's missing part of his hand--something that Roy noticed during their scuffle. The man they find lost part of his hand--and his wife--during the earthquake. Felicity unveils a new bow she had custom-made for Ollie, which he calls "perfect." She tells him that she had stopped thinking about the bodies, that being the Hood meant sometimes people will die, but that maybe there's another way. Oliver asks what other way there could be. In the island flashback, Ollie and Slade are watching Shado and her captors, biding their time to rescue her. When they hold a knife to her throat, Ollie dives in and they end up slaughtering the captors--Ollie stabbing the one with the knife pretty brutally. 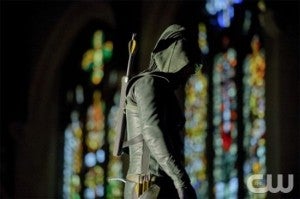 At The Hoods's hideout, they're discussing what to do with Thea--it's their talk about her mother that finally convinces her to defend her mother. Just before they shoot Thea, though, an arrow takes out one of their guns and Ollie/Arrow leaps into action, brutalizing the men in short order. One of them is taking her away when Ollie points an arrow at his head and demands the man let her go. When he doesn't, Ollie fires off an arrow that knocks the man off a ledge, but then catches him, tells Thea to run and saves the man. Outside, he runs into Officer Lance, and tells him that he's "trying another way," explaining the reason The Hoods are still alive. The next morning, Oliver is visiting Tommy's grave when Laurel shows up to do the same. There's a brief, awkward moment before Ollie says he understands why they can't be together but he still needs her to be in his life. She agrees. He tells her that he feels like he betrayed Tommy. She tells him that she plans on capturing the archer for her bosses, since there's only one of the two left who were responsible for Tommy's death. Finally, Thea visits her mother in prison and tells her that she almost died last night, and that she would have felt terrible if she died and her mother spent the rest of her life thinking Thea hated her. She says she wants to, really tried to, but she can't. Her mother tells her that "However long I am in this place, you have freed me" saying that. The two hug. At Queen, Ollie brings Walter Steele into the room as a rescue financier; between Ollie and Walter, they now own 50% and Rochev the other 50%, making them partners. Rochev storms out, and Walter tells Oliver he's happy to be someone Ollie can still count on, and that his father would be proud. In the island flashback, Ollie regrets the murder he just committed, and Slade says that they aren't alone, but where did the intruders come from. Back in the present day, Thea tells Roy that she's just back from seeing her mom.  He agrees to stop going out at night, and then immediately stops a rape in progress by stepping into a group of three guys. When he's momentarily stunned bya  strong hit, a woman in black comes in and beats the crap out of them all in seconds--it's Black Canary, but she says nothing of the sort, just runs off when Roy asks where she came from. Back in the cave, Ollie tells Felicity and Diggle that the city still needs saving--but not by "The Hood." It needs something more. Diggle says it needs a hero. Ollie decides to rebrand, that he doesn't want to be called The Hood anymore. Diggle asks him what he wants to be called and the episode ends with Ollie staring at a green arrowhead.