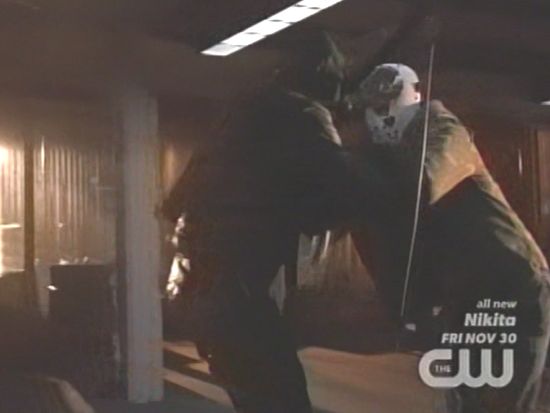 The "Legacies" episode of Arrow kicks off with The Royal Flush Gang robbing a bank, but in the process one of their members winds up shooting a cop. When the police surround the bank, The Royal Flush Gang sends all the hostages out wearing copies of their masks, while they escape through a hole in the bank floor. Meanwhile, Oliver Queen is hard at work training with his bodyguard/new partner John Diggle. Diggle wants Oliver to start going after other criminals like the Royal Flush Gang, but Oliver wants to stick to his list. As Oliver trains, his friend Tommy Merlyn is busy making the moves on his former girlfriend Laurel Lance, but Laurel is pre-occupied with her legal firm's financial problems. Back at the Queen estate, Oliver's mother is talking about Carter Bowen coming to visit, but Oliver and his sister Thea seem fed up with hearing about Carter. Diggle calls to tell Oliver that someone on his list just tried to commit suicide, and Oliver rushes off to investigate. But when Oliver meets up with Diggle, it turns out that Diggle was tricking Oliver. Diggle was actually arranging for Oliver to provide better medical care for the police officer shot by The Royal Flush Gang. Instead of being upset, Oliver agrees to go after The Royal Flush Gang. As Arrow, Oliver breaks into police headquarters to get evidence needed to track down The Royal Flush Gang. Meanwhile, Tommy Merlyn offers to sponsor a fundraiser for Laurel's legal firm. Oliver uses a ring impression left on one of the bank employees hit by a member of The Royal Flush Gang to identify Kyle Reston as one of the bankrobbers. Oliver figures out that the entire Reston family is The Royal Flush Gang, which reminds Oliver of his own family. Oliver rushes home for dinner with his mom, his sister and the Bowens. As the Queens dine with the Bowens, The Royal Flush Gang hits another bank. Diggle interrupts the dinner to give the information to Oliver, and Oliver rushes off to stop them. As Arrow, Oliver interrupts the robbery, and The Royal Flush Gang runs away. Oliver uses his company's computer whiz to track down information on the father Derek Reston. It turns out that Derek Reston use to work for Oliver's father. In fact, Oliver's father shut down the plant where Derek worked, while not even paying him the severance and pension he was owed. Oliver Queen decides to confront Derek Reston to give him the chance to make it right. Oliver admits to Derek that his father hurt people and says when people are hurt they make the wrong choices. Oliver offers Derek an apology and a job. However, Derek says he doesn't need charity from the son of the man who screwed him over. Before leaving, Oliver drops a bug on Derek. Oliver listens to hear Derek and his wife planning to pull one last job for the sake of their son. Meanwhile, Tommy Merlyn hosts his benefit for Laurel's legal firm. Thea shows up at the benefit and gets upset when she realizes Tommy is interested in Laurel and not her. The Royal Flush Gang knocks out a security guard and breaks into a room full of cash. Arrow interrupts their robbery and tangles with Kyle Reston. The security guard wakes up, and he shoots at Kyle, but Derek jumps in front of bullet. As Derek is dying, Arrow reveals himself as Oliver and reassures Derek that Kyle is ok. Back at the benefit, Thea starts hitting on Tommy Merlyn, but Tommy says she's like his baby sister. Thea has been drinking and she goes outside to throw up, and Tommy takes care of her. Laurel goes outside as well and appears to be moved by Tommy taking care of Thea, and she gives him a kiss. As Arrow is moping about the death of Derek Reston, Diggle tells Arrow that his dad would be honored about the way he stepped up to try to help the people his dad had hurt. Diggle tells Arrow that the police officer that was shot by The Royal Flush Gang woke up and is going to be fine. After Diggle's words of encouragement, Oliver feels better and goes for burgers and milkshakes with his mom.