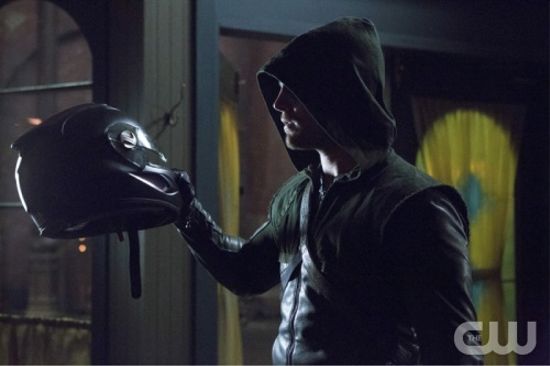 In the "Muse of Fire" episode of Arrow, Oliver Queen goes to meet his mother for lunch at Queen Consolidated. A motorcycle driver pulls up shoots at his Oliver's mother and a man that is with her. After seeing his mother is ok, Oliver chases after the motorcycle driver, but is unable to catch the driver. At the hospital, Detective Lance tells Oliver Queen that his mother wasn't the target that the man she was with was connected to the mob. Meanwhile, Tommy Merlyn shows up at Laurel Lance's apartment to ask her out on a date. In order to find the man that shot at his mother, Oliver Queen decides to go undercover with the mob. Oliver tells Diggle that when he find out who the man is that the man is going to be a dead man. Except it turns out that the motorcycle driver isn't a man, as the scene flashes to the driver crossing out the photo of the man she shot and removing her helmet. Oliver Queen is talking to his sister Thea, when Tommy Merlyn shows up. Tommy tells Oliver that he is going on a dinner date with Laurel. Oliver gives Tommy his blessing, but he has to leave for a business meeting. Oliver Queen shows up to meet a man named Mr. Bertinelli, who is obviously mob connected. Mr. Bertinelli tells Oliver Queen that he wants the contract to build Queen Consolidated's applied science center, and Oliver agrees. Mr. Bertinelli introduces Oliver to his daughter Helena, who he then sends to lunch with Oliver to discuss the deal. At dinner, Helena asks Oliver why he would want to go in business with her father, considering what her father does and how he made his money. Helena asks if there was ever a day on the island when he was just happy to be away from everything, and Oliver says those are the days that he misses. Meanwhile, Tommy Merlyn is also out on his dinner date with Laurel Lance, and he tells her that he wishes they had just met. The waiter tells Tommy Merlyn that his credit card has been declined, and the credit card company wants him to confiscate it. Oliver notices Helena's cross, and Helena reveals it was a gift from her dead fiancée. Oliver gets a call from Diggle, who tells him that he has to get out of there. Before leaving, Oliver tells Helena the he's really glad that he went out with her tonight. Diggle tells Oliver that Mr. Bertinelli's enforcer Salvati is paying visits to everyone that pays protection money, and his next visit turns out to be at a restaurant near where Oliver is at. Just as Salvati is about to break the restaurant owners fingers, Arrow shows up, as well as the helmeted motorcycle driver. Arrow fights with the driver, before pulling off her helmet to reveal that it is Helena Bertinelli. Detective Lance is reviewing the video from the restaurant, when he spies Oliver Queen having dinner with Helena Bertenelli. Detective Lance pays a visit to Oliver Queen to warn him that he should stay away from Helena. Meanwhile, Tommy Merlyn confronts his parents over why his trust fund money has been frozen, and his father tells him that he should have done it sooner. Oliver Queen finds Helena visiting the gravesite of her fiancée. As Helena is leaving, Salvati and several armed men pull up in a van and take the two hostage. Salvati shows Helena that she dropped her cross at the restaurant, so he knows she's the motorcycle driver. Helena says that her father had her fiancée Michael murdered. Salvati says that Michael was gathering evidence for the F.B.I., and Helena says that it was actually her gathering the evidence, because she hated what her father did. Oliver breaks free from his constraints and starts fighting with the Salvati and his men. Helena also gets free and helps him. Helena breaks Salvati's neck. She tells Oliver that she didn't have a choice because no one can know her secret. Back at Laurel's apartment, Tommy Merlyn shows up and tells her that his dad has cut him off completely, but she reassures him that he will be fine. At the Queen mansion, Walter Steele shows up to reunite with Oliver's mom. Oliver shows up to visit Helena, and she reveals that she knows he's Arrow. Oliver says that what Helena is doing is not justice that it's revenge. Helena tells Oliver that they are the same, which leads first to tears and then a makeout session.

One Piece Cliffhanger Introduces the Story's Most Mysterious Devil Fruit Yet