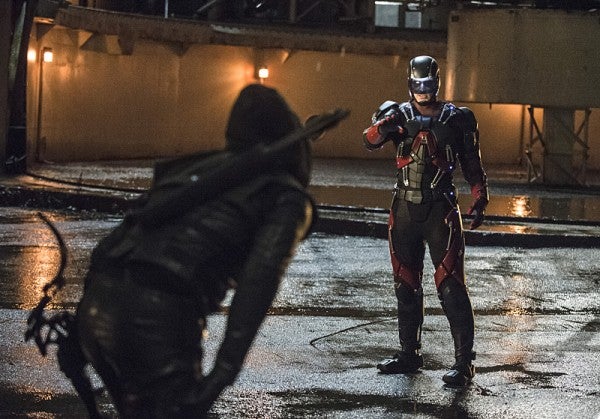 "Suicidal Tendencies" begins with the wedding of Diggle and Lyla. As usual, Oliver is late for the photos. But, he's in time for the wedding ceremony. Not the best Best Man material, but Diggle forgives him.

Felicity then arrives to the wedding, with Ray Palmer as her "Plus One." Oliver is clearly jealous. Diggle learns this his minister can't make it to the wedding, but fortunately, Ray is an ordained minister and can perform the ceremony. With Ray at the altar, Diggle and Lyla exchange their vows and are pronounced husband and wife.

At the wedding reception, Arrow longingly watches Diggle and Lyla dance. Laurel approaches Oliver, and discusses how a woman, though she wont tell who (It's Nyssa Al Ghul) is furthering her training. Then, Felicity comes over and says that she caught the bouquet. At this point, Olvier and Felicity must address the elephant in the room—namely their failed romance. Felicity says that Ray makes her very happy. But, Felicity gets a text update informing her about Ra's al Ghul's killings dressed as The Arrow.

Team Arrow retreats to the Arrow Cave, where they watch a press conference. Ray Palmer publicly announces a manhunt for The Arrow, not knowing that Arrow was framed. Oliver puts a plan into action, but insists that Diggle and Lyla still go to Fiji for their honeymoon. The newly-weds decide to take his advice, but when they enter their limo, they find Floyd Lawton, a.k.a. Deadshot, waiting for them. He comes with news that the Suicide Squad is needed for another mission. Looks like that Honeymoon will have to wait after all.

The two are whisked to ARGUS' headquarters, where they see Amanda Waller. Waller tells them that Task Force X must extract a U.S. Senator who's being held hostage by from Kasnian terrorists. Waller then introduces the Squad's newest member, Cupid.

Once In Kasnia, the Squad approaches a hospital holding the hostages. Cupid says that she's still in love with Arrow, and can't wait to marry them. Deadshot calls her crazy, along with Diggle and Lyla for getting maried. Lyla and Diggle argue over their strategy, but find a compromise.

This cues a flashback for Deadshot, to years prior. In the memory, Floyd Lawton returns home to his wife and young child after a years-long military tour of service. It's the first time Floyd's ever met his daughter, who looks scared of Floyd.

Back at the Arrow Cave, Oliver suits up and looks for Ra's al Ghul while patrolling. He busts a drug raid in a warhouse, but a League of Assassins member dressed as The Arrow is also there. They fight, but several other costumed imposters enter the warehouse and start fighting Arrow. Maseo enters the warehouse next, stops the fighting, and urges Arrow to join Ra's Al Ghul. If Arrow doesn't, the murders will continue. Then, using a smoke grenade, Maseo and the Arrow imposters vanish.

But Oliver's problems are about to get worse. Flying through the skies of Starling City, The Atom picks up Arrow's thermal signature, standing over eight bodies from the skirmish. Ray then performs an X-ray bio reading on Arrow. Through his scans, he determines that Oliver Queen is the Arrow.

The next day, Ray tells Felicity that he knows Oliver's secret, and quickly discovers that Felicity is a major part of Arrow's operation. Felicity tries convincing Ray that Oliver is being framed, but Ray doesn't trust her. Furthermore, he doesn't know if he can still have feelings for Felicity. Ray tells her that he'll keep his promise to bring the Arrow to justice.

As Deadshot continues his Kasnian raid with the Squad, he has more flashbacks. He recalls how he became angry, antisocial, and unstable following his return from war. He snaps when his wife confronts his struggles, and pulls a gun on her. Terrified, the wife calls 911.

Back at the Arrow Cave, Felicity tells Oliver that Ray knows his secret. She warns Oliver that Ray will come after him, and share Oliver's secret with the police. At the District Attorney's office, Ray speaks with Laurel about his findings. Laurel tells Ray that his evidence isn't substantial enough. Ray knows of Laurel's history with Oliver, and knows that she's covering for him. Laurel warns Ray that if Ray leaks his findings to the press, Oliver will sue for defamation, and win. With the law unable to help him, Ray says he'll seek justice on his own.

Back in Kasnia, the Squad finds the senator and the other hostages. The Senator start panicking though, and says that they weren't supposed to be saved by the Squad. The Senator then pulls out a gun and points it at Deadshot. Cupid saves Deadshot's life, but he's still hit in a non-lethal area. Cupid is impressed with the bravery though, and falls in love with him.

The senator reveals that the entire hostage scenario was a set-up. He staged the ordeal to boost his profile and appeal for an eventual Presidential candidacy. Lyla discovers that the hospital is rigged with timed explosives, and will blow at any moment. They don't think they'll make it out alive, but Deadshot promises that they'll return home to their daughter.

This triggers a new flashback for Floyd. He's in prison following the assault on his family, but HIVE bails him out. A representative from HIVE tells Floyd that his family will never love him again. His best bet at a happy life, she argues, is to become HIVE's bounty hunter and take out their target: Andrew Diggle.

In Starling City, Oliver confronts Ray in his office. He claims his innocence, by Ray doesn't believe him, and says that he'll do whatever it takes to save Starling City and bring the Arrow in. Arrow returns the Cave, where he and Felicity argue about Ray's instability. The conversation quickly loops back to their relationship though. Oliver says that like himself, Ray could never be a romantic partner and a vigilante. It just doesn't work. But Arrow gets s tip of a drug shipment in progress across town.

Arrow shows up to the scene with Arsenal, but there are no criminals there. Then, the Atom arrives and says that he planted the tip as a trap. Arrow, Arsenal and Atom, quickly start fighting. The Atom almost gets Oliver, but Oliver disrupts Ray's armor and draws his bow on him. Oliver says he won't kill Ray though, because he's not a murderer. In an attempt to prove his innocence and gain Ray's trust, Arrow helps Ray up and tells him to trust Felicity once again.

Back in Kasnia, an ARGUS support team get the upper on the Senator, but the Senator still has an instant detonator for the building's bomb. Everyone puts their weapons down, but the Senator notices that Deadshot is missing. On cue, Headshot shoots the detonator out of the Senator's hand. With his leverage gone, the Senator and his goons are quickly foiled by the Squad. Everyone flees the building, except Deadshot. He sticks round to provide cover as they reach safety. Unfortunately, he doesn't have enough time to exit the building himself before the bomb's automatic timer goes off. Taking one last look an old family photo, Deadshot welcomes the explosion and dies.

Back at Ray's lab, Felicity finds Ray tweaking his Atom armor. He apologizes for not trusting Oliver, and Felicity says it's alright. They kiss, reconstituting their relationship. Over at Diggle and Lyla's, the newlyweds reunite with their daughter. Lyla then says that she resigned from ARGUS, wanting to set a good example for their daughter. Diggle is proud of her decision.

In the ArrowCave, Felicity and Oliver patch things up. Diggle returns to the Cave, and the two share a shot of Vodka in Deadshot's name.

Across town, Ray Palmer tells Captain Lance and The Starling City District Attorney that he's changed his mind about the Arrow. But Ray tries defending The Arrow, an arrow bursts through the window and hits the District Attorney in the heart. The assailant: Maseo, dressed as The Arrow. As if Captain Lance didn't trust the Arrow already, it looks like a war between Arrow and Starling City Police is inevitable now.