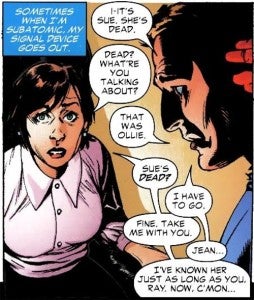 have learned that Jean Loring, the wife of longtime Justice League member Ray Palmer (The Atom), will appear on the next season of Arrow, portrayed by Stargate SG-1 actress Teryl Rothery.

Rothery will appear as part of a multi-episode arc beginning in episode three of the new season, which may not surprise fans who remember that there was a passing reference to Laurel's friend Ray and his girlfriend Jean during the show's first season. There are a couple of brief quotes from Rothery and some more details at the GATV story above.

GATV, who were also the first to break that Kate Spencer would be appearing as a district attorney on the popular DC Comics adaptation, have the official character breakdown from Warner Bros. Television:

Jean makes her way onto “Arrow” as a longtime friend and legal counsel to Moira Queen, who is on trial for her role in the destruction of The Glades, but soon finds herself pulled into the scandalous lives of the entire Queen family.

Appearing so early, wonders whether there will still be fallout from Tommy's death in the finale to deal with at that point, as that would be something that both a friend of Laurel's and a family attorney might be called upon to deal with.

With the addition of Loring, as well as Metamorpho and The Flash, one has to wonder how many of the "Satellite Era" Justice League members may appear in the series this year (remember, too, that in the comics, Felicity Smoak has connections to Firestorm).