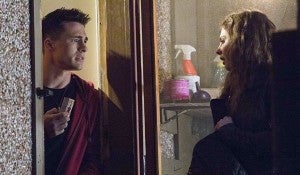 During the recent Arrow panel at PaleyFest and a number of the interviews that have spun out of that weekend, much of the conversation has revolved around Colton Haynes, who plays founding Teen Titan Roy Harper in the comic book adaptation. Harper--best known to fans as Arsenal of Red Hood and the Outlaws, formerly as Green Arrow's sidekick Speedy--recently began appearing on the hit CW drama, leading fans to wonder what his long-term role might be. While showrunners have hesitated to answer that question (much as they have inquiries about Laurel's eventual conversion to Black Canary), one thing is now clear: we'll be seeeing a lot more of him around Starling City. That's because Haynes has just been upgraded to series regular for next year, after recurring on the second half of season one (he's only been in one episode so far). In the series, he plays a character who has lived a life of crime in a bad part of town, but who's now in a relationship with Oliver's sister Thea.