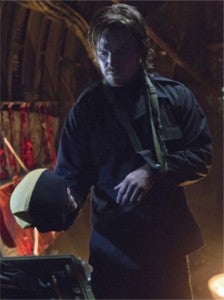 It's Arrow meets Heroes when David Anders guest stars. Anders is best known for playing Adam Monroe on the new canceled Heroes series and for playing Julian Sark on Alias. He's also appeared on Once Upon A Time and The Vampire Diaries. The thirteenth episode of Arrow is entitled "Betrayal." According to The CW description, "Cyrus Vanch, a nefarious criminal, is recently released from prison and intends to re-secure his position as leader of the underworld. His first step is to take down his biggest opponent in the city – Arrow. Meanwhile, Oliver shows Moira his father's notebook and questions her about the names on the list. Thea is miserable as she starts her internship with Laurel at the legal aid office and Detective Lance makes a deadly mistake that puts Laurel in the crosshairs of Vanch." Guy Bee directed the episode, which was written by Lana Cho and Beth Schwartz. " The "Betrayal" episode of Arrow airs on The CW on Wednesday, February 6 starting at 8 PM ET.