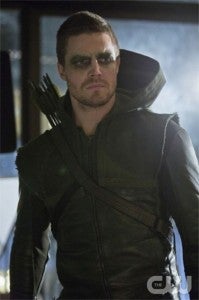 On tonight's episode of Arrow, Michael Rowe returns as Deadshot. Also, this particular episode of Arrow is written by someone who should be a very familiar name to comic book fans. The sixteenth episode of Arrow is entitled "Dead To Rights." According to The CW description, "Oliver and Diggle learn that Deadshot (guest star Michael Rowe) is still alive and his next target is Malcom. Malcom invites Tommy to attend a benefit honoring Malcom for his work with Starling City but Tommy refuses to attend. Oliver encourages his friend to mend his relationship with his father while he can. Meanwhile, Oliver struggles to balance his new relationship with McKenna and his duties as Arrow. Katie Cassidy, Paul Blackthorne and Susanna Thompson also star." Glen Winter directed the episode, which was written by Geoff Johns. The "Dead To Rights" episode of Arrow airs on The CW on Wednesday, February 27 starting at 8 PM ET.