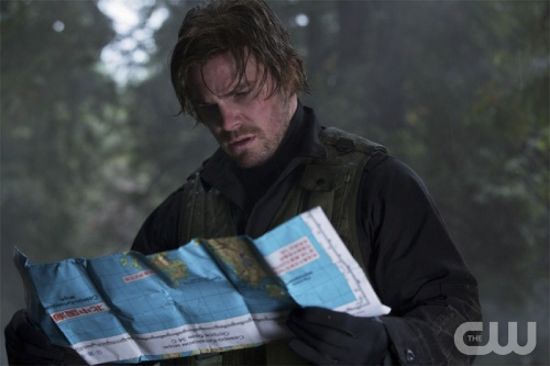 Arrow continues to provide a reason to tune into The CW every Wednesday night. On tonight's episode, it looks like the well-dressed man is back. Of course, the well-dressed man has been revealed to be Malcolm Merlyn and secretly the Dark Archer. The eleventh episode of Arrow is entitled "Trust But Verify." According to The CW description, "The next person on Arrow's (Stephen Amell) list is Diggle's (David Ramsey) commanding officer and mentor from Afghanistan, Ted Gaynor (guest star Ben Browder). Oliver suspects Ted is responsible for recent armoured truck robberies, but Diggle defends Ted and takes a job at Ted's security company to keep an eye on him. Oliver decides to make a move on Ted, which puts him at odds with Diggle. Meanwhile, Thea (Willa Holland) suspects that Moira (Susanna Thompson) is having an affair with Malcom (guest star John Barrowman). Tommy (Colin Donnell) and Laurel (Katie Cassidy) have an awkward dinner with Malcom. " Nick Copus directed the episode, which was written by Gabrielle Stanton. The "Trust But Verify" episode of Arrow airs on The CW on Wednesday, January 23 starting at 8 PM ET.