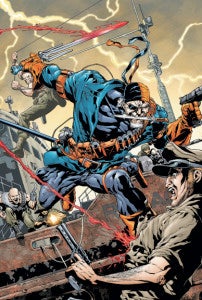 According to Michael Ausiello, the spoiler maven over at TVLine, the island flashback side of things on The CW's hit superhero adaptation Arrow won't get any easier, even as Ollie is spending his "current day" time hanging out with Barry Allen, better known as The Flash.

"If you ever wondered how Oliver’s island existence, seen in flashback, could have been any worse, here’s a short answer for you: pirates," Ausiello teased in his column this week.

Of course, DC Comics doesn't have any shortage of pirates or pirate-themed characters, but who could it be--if anyone--who appears as a pirate in the show?

Our money is on "nobody new." If you'll remember, the Geoff Johns-written miniseries Flashpoint featured a spinoff in which Arrow's island antagonist Deathstroke the Terminator appeared as the captain of his own pirate ship (as seen above).

And, after all, if he's going to lose an eye, wouldn't it make sense to make Deathstroke a pirate? Maybe give him a parrot?

It wouldn't be too surprising to see the Arrow writers--which occasionally is a group that includes Johns anyway--looking to integrate elements of that into the Arrow universe.

Especially if, as we suggested earlier, the Flash material could be looking to the recent animated feature film Justice League: The Flashpoint Paradox for inspiration with regard to how Flash's speed powers should be depicted. Going back to the Flashpoint well could yield some interesting spins on familiar characters...

Arrow Spoiler: Who's Coming to the Island?